Metal Slader Glory is an adventure game with some great artwork by the manga artist Yoshimiru Hoshi.

A long development cycle, very large cartridge size for a Famicom game and a limited print run due to the scarcity of the MMC5 chip needed to produce the cartridge almost drove HAL Laboratory to bankruptcy, to the point where Nintendo had to bail the company out on the condition of them becoming a second-party developer.[2] The game was later ported to the Super Famicom as Metal Slader Glory: Director's Cut. 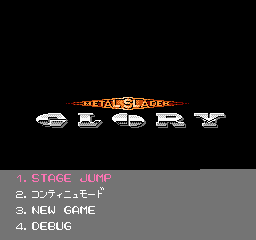 Below details the unique options each stage menu has.

The game stores a dictionary entry's length within a pointer, the dialogue entries don't use these bits in the final game.

There's two separate pointer processing routines for the dictionary and dialogue. Both are very similar, however, the dialogue pointer routine supports pointers for a 1 MB PRG mapper by using a bit used for the dictionary length. The final release uses a 0.5 MB PRG mapper, which negates the use of another pointer routine. In other words, the biggest Famicom game, which is 1 MB, has logic to be on a bigger cart!

The dialogue pointer routine never uses the other length bits (b1 b2 b3), however as observed in the Stardust Crusader translation, the game does allow you to use them.

02 in the game's AGL (Adventure Game Language) bytecode controls which scenes are loaded. By modifying its two arguments, a scene can be forced to load. Use the following cheat code and then access Stage 1 > Debug > 1 > 1 to access any desired scene:

Located at 0x09D010 are graphics for Elina in the shower. While you do have to enter the bathroom while she's showering to progress the story, you aren't allowed to open the shower door in both the Famicom and Super Famicom versions. The graphic is mostly the same in the director's cut, however, Elina's breasts and butt were enlarged. This scene cannot be seen in-game with the debug menu or with the above cheat code in the Famicom version. In the director's cut, the scene can be accessed from one of the debug menus. The bank appears to have animated shower water droplet sprites just like the SNES version.

Located at 0x09CF10 are graphics for Tadashi holding Elina's underwear. While you do have access to her underwear in the bathroom and are allowed to choose the options to interact with it, Tadashi, in the retail release, objects following through with it. This scene is based on another scene present in the retail release. Disabling the sprite layer reveals empty white space where he would've held up the underwear. Just like the Elina shower scene, this scene cannot be seen in-game with the debug menu or with the above cheat code in the Famicom version.

Tadashi and Azusa in the Moonface's Cockpit

The game contains a handful of variations of this scene with different characters present. One variation, containing Tadashi and Azusa, is unused as there isn't a scenario with them alone in the Moonface's cockpit.

This scene contains remains of a killed alien in a room from stage 5. This was most likely going to be used when you kill Jiff after he lures you into one of the few empty rooms in Colony 03. In the final game, his remains are instead located outside the room.

The pointer table at 0x3D5C references name cards, control codes, and dictionary entries. Name cards indicate who is talking. It also controls text speed, text color, and speech pattern. The numbers inside brackets are bytes. These bytes are interpreted by the game's engine. For example, the second byte, 0x07, indicates the text to print is 7 characters long.

Most unused name cards are variations of used ones, with the same text speed, text color, and speech pattern.

0x45 in the game's AGL bytecode controls what dialogue branches are loaded. By modifying its two arguments, a dialogue branch can be forced to load. Use the following cheat code and then access Stage 1 > Debug > 1 > 1 to access any desired dialogue branch:

0x4E in the game's AGL bytecode controls what dialogue branches are loaded. To force load specific lines of text, use the following code and navigate the aforementioned options.

In Chapter 2, if you constantly go to Silkiene's office when it's empty, you'll drive your girlfriend, Elina, insane. One line for this event appears to go unused.

The above text entries are right near entries for chapter 3's bathroom dialogue. Given there's an unused graphic of Tadashi holding Elina's panties, these entries appear related to this scrapped event.

A few lines located among text for the combat mini-game. This text probably would have been presented before choosing Elina's actions. This was likely discarded given the time sensitive nature of the game mode.

For aliens battles levels 2 and 3, Elina gives a brief summary of the enemies you're up against. Here's the summaries:

The summaries are created using pieced together strings. One enemy string is unused:

In chapter 7, the T-Stork displays a countdown timer to indicate when the beam will fire. The timer will turn red when it reaches roughly 10 seconds, however, the timer is only seen reaching 11:20 before the game transitions to another scene. You can adjust the timer's starting time by changing 0x5d635 from $EA to $9B to see this occur in-game. However, this can be seen in the Super Famicom version.

As to be expected, the Virtual Console release makes adjustments for those with epilepsy. All the modifications to the game were done through a patch rather than a recompilation. For example, for the spaceship launch scene in chapter 1, the intensity of the screen flashing was reduced through a palette change. Additionally, multiple code changes were made. While their exact effects are unknown, they're likely screen flashing related. However, other scenes with intense screen flashing, such as ones in Chapter 7, were seemingly left untouched.