Metroid Prime 2: Echoes is, as you may have guessed, the sequel to Metroid Prime. It's got several improvements like re-adding the screw attack and wall jumping that was cut out of the original game and a more intense storyline focusing on the battle between the Luminoth and the Ing over the planet of Aether. It's also got complex puzzles, more creative bosses, and a smooth rise in difficulty.

The only questionable thing is the Dark and Sky temple keys fetch quest toward the end of the game, due to how lengthy and tedious it is. It's also absolutely packed with unused content, likely due to a sudden deadline pushed by Nintendo. It's also notable for being one of three PAL GameCube games (the other two being The Legend of Zelda: Collector's Edition and Geist) to completely lack 50Hz support.

There were a few enemies that didn't make the cut. Unfortunately, for most of them, all that's left are some namedrops in various files. Most of these are darklings and Prime 1 leftovers; there are a couple totally unique ones, though.

Power Bombs were originally going to have dark- and light-themed variants in the form of Dark, Light, and Annihilator Bombs. There's a few unused scans detailing how these would have worked that would have shown up in the inventory screen:

In Metroid6.pak, unused text strings exist for the following: 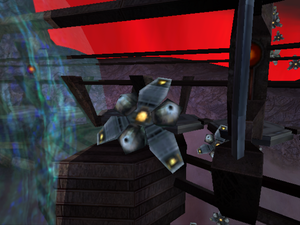 Airthorns are a swarm enemy that only appear in Dark Transit Station in Dark Agon Wastes as decoration in the background of a Morph Ball tunnel, where you can't scan it or interact with it. By going out of bounds, however, they can be scanned, revealing that they have a name, a full logbook entry and a backstory. Although the scan doesn't appear in the logbook, the amount of detail suggests it was probably originally intended to.

One of the string files for the UI has an interesting string called RezbitWeaponVirus that references an unused Rezbit attack that would've disabled your weapons:

Weapon systems have been infected with the Rezbit Virus. Should recover momentarily.

Another FrontEnd.pak STRG file (64066d10.STRG) contains an early version of the intro text:

A couple strings are left over referencing a demo for the 2004 Gamer's Summit:

There's another string referencing an Extras menu. The Extras menu in Prime 1 contained the Fusion Suit and NES Metroid, but Prime 2's menu doesn't have an Extras tab. Evidently it did at one point, until whatever was behind it was cut.

There's a string at the end of the GFMC Compound transmission (00e70990.STRG) that goes unused.

The files that set up the logbook/pause menu hierarchy have quite a few alternate names for objects, enemies, upgrades, and logbook categories:

Lightbringers are an "enemy" which act as mobile Light Crystals. Quite useful. However, the only ones in the game disappear after getting the Space Jump, before getting any of the alternate Beam weapons.

Despite this, using glitches to skip the Space Jump reveals that Lightbringers have unique reactions to all three Beam weapons! The Light Beam supercharges them, and the Dark Beam nullifies them, just like the normal crystals/beacons. However, the Annihilator Beam destroys them, a behavior unlike the standard crystals, but which is actually mentioned in the Lightbringer's scan data! They drop an Ultra Energy when destroyed; you can also use a charged Dark Beam shot to freeze one and fire a missile at it. This behavior would suggest that the Lightbringers were intended to see greater use than they wound up getting.

A debug room called 00_scandummy is present in Temple Grounds. It's attached to Defiled Shrine, but since it seems to be attached using a virtual dock, there doesn't seem to be a way to actually enter it in-game. The room geometry is just a box with a flat metallic material on it; there's no lighting or lightmap on the material so it appears pitch-black. Aside from the dock attaching it to Defiled Shrine, the room contains PointOfInterest objects for every inventory scan file in the game, including a few for unused items. 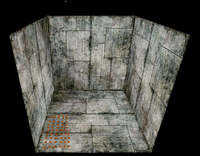 An early listing of the game's streams present on the disc references eight tracks which are not present in the final game. Many of these seem to have been replaced, as pirates_kyu.dsp is nowhere to be found but pirates_kyu-3-32.dsp is on the final disc and is used. It stands to reason that pirates_kyu.dsp would have been a predecessor of this track.

Additionally, some strings in FrontEnd.pak reference several Prime 1 music tracks that were evidently intended to be playable in multiplayer at one point: 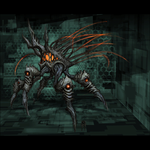 The penultimate boss of the game, the Emperor Ing, has a few discrepancies in its final phase which suggest the fight was to be a much more complex, strategic affair than it wound up as.

"Further exposure to Phazon has mutated the Emperor Ing. It is now capable of shielding its vulnerable areas with energy barriers. Beams of opposite polarity can damage these barriers, however. Heavy damage to these barriers will cause them to drop, exposing the creatures weak spots. Target the weak spots to immobilize and damage the enemy."

This text from Mutated Emperor Ing's scan data mentions it putting up barriers around its weak points, of which there were multiple. The description suggests you need to switch beams to match the barrier color at the moment, and destroy the barrier before letting loose on that weak spot...but there is nothing like this in any phase during the Emperor Ing battle.

However, If Samus performs the Screw Attack at a tiny area of space just behind any one of Emperor Ing's five feet, it will take massive damage. It has no reaction to being damaged in these locations; it just continues moving, and no barriers are put up. Some data remains in the game which suggests how the fight would have worked.

There are empty Ing "eye" sockets at the joint of each leg. A piece of concept art in the Image Gallery reveals that these were intended to have fleshy orbs matching the color of the core in them, which were presumably the barriers. It can be assumed you'd have targeted and destroyed these (thus breaking their barriers, and leaving the empty sockets on the model) before attacking the weak point they protected. This piece of concept art also reveals with a Samus scale indicator that Emperor Ing was roughly the size of Quadraxis so it's possible the original idea for breaking leg joints in a large spider like enemy was reused for the first phase of the Quadraxis fight.

It should be noted that the game handles damage to these weak points and damage to the core differently; if the Emperor Ing is damaged using one of the weak points on his legs while the core is any color but red, and beam damage is dealt to the core after this but before it changes color, all of the damage dealt through the old weak points will be completely recovered. This means that the game keeps track of the damage dealt to these weak points separately, which suggests they were to be destructible. The code allowing the Emperor Ing to heal in this situation probably has something to do with the barrier color switching.