Midnight Club 3: Dub Edition is the third Midnight Club game, introducing a partnership with DUB Magazine and adding licensed cars/bikes, as well as customization. In 2006, the game was given a re-release with additional content called REMIX. 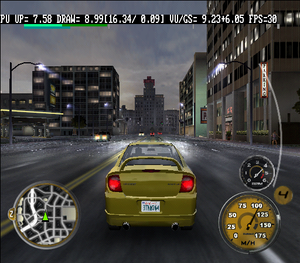 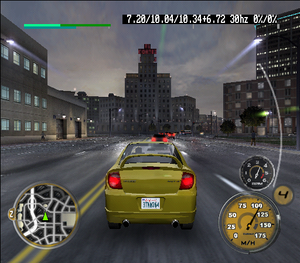 One of the displays on PS2 has two pages - CPU, GPU usage, framerate and the like. They can be switched between each other by changing the xx in the codes below with either 01 or 02. The Xbox version only has a cut down variant of the 1st page present, and the same codes apply to both regions.

The other display shows a few performance graphs on the screen. This is only present in the PS2 version.

It's unknown if these cars were ever intended to be added to the game, or their sounds were recorded and used as references/in the game itself. Some cars in the game do not have names listed here, meaning some cars likely use these samples. In Midnight Club 2, there exists a z3.td, cbr.td, bmw.td among others, which means that some of these files were likely renamed and carried over from the previous game.

A Mercedes-Benz Maybach as well as ATVs/dirt bikes are listed in the games memory.

Certain songs were listed in the game's files but were cut, but did not make it due to licensing issues with either the artist(s) themselves.

Some songs were considered as loading screen music, but ended up being unused. One being Authority Zero's Revolution, which was also featured in MX vs. ATV Unleashed.

Certain paint jobs were cut from the game, but are possible to enable through Cheat Engine.

In the game's ASSETS.DAT package folder in tune>vehicle>customdata>paintjobs, there is a file called "paintjoblist.txt" which contains the list of Paint Job types. There is one Paint Job listed there that does not exist within the game customization options. That Paint Job is "Enamel". Whilst using Cheat Engine to attempt to enable Enamel, two paint job types were found. The Paint Job type uses a Hex value from 01-04. The Paint Job Color uses a Hex Value right after the Paint Job Type Hex Value. Upon changing the Hex Value to 05, a new type of Paint Job Appears, it is fully customizable, so it might be the lost Enamel Paint Job. However, after changing to anything higher than 05, like 06 or 07, a different Paint Job appears, which only contains two colors. One is a bright cyan, when using a value of FF in the color value section (Custom Color Hex Value) and the other color is a bright green when anything except FF is put into the color value. This might have been a prototype of Enamel, or some kind of Debugging Color Shader to differentiate between custom color or not. It is unknown if any of these are the lost Enamel Paint Job, but the first one that is customizable, might be the one.

Many generic motorcycle riders are exclusive to NPC opponents. These riders typically feature a covered face via a helmet or mask as well as no cloth physics, contrasting player riders.

An unused body kit, grille, and tinted taillights for the 1996 Chevrolet Impala SS (Gen VII) can be seen on NPC opponents. This body kit is based on a real '96 Impala SS featured by Dub Magazine, as seen on an Impala SS diecast model in the Dub City line by Jada Toys. Additionally, the exhaust can be changed whereas this is normally impossible.

An unused aftermarket hood for tuners featuring two carbon fiber slits can be seen in use by various NPC presets. This hood model exists for each tuner, and was also remodeled for the tuners featured in Remix.

Carbon fiber hoods are seen in use by many NPCs on vehicles where they normally aren't available, typically exotics.

The PSP has a simplified loading screen likely due to hardware limitations.

The PSP version lacks damage models for every vehicle.

Likewise, the Cadillac Cien and Dodge Viper GTS-R Concept's prices were reduced to $100,000, and the Chrysler Me Four Twelve's price was reduced to $140,000.

The REMIX edition added Tokyo, 24 new vehicles, and 25 new songs, as well as changing the UI theme to mostly red.

A glitch occurs in which if the player bought a neon color that costs $250, the other neons that were not bought would become listed as purchased. This glitch was fixed in the REMIX edition of the game.

The save game data icon of Midnight Club 3: DUB Edition is red, while the REMIX version instead uses a light purplish-blue save data icon in the PS2 Browser.

Save game data for the original Midnight Club 3: DUB Edition can be used with the REMIX edition, provided that the save game must be imported first, identified with DUB Edition instead of the city name when booting up the game.

The left side arrows were replaced by a wave of squares in the REMIX edition. Some loading screens were also changed, such as tournaments now featuring the prize vehicle in the loading screen, the Unbeatable Street Racers' loading screen being changed from Cheng's Mitsubishi Lancer Evolution VIII (CT9A) to a Mitsubishi Eclipse GT-S (3G) and a Volkswagen Golf R32 (Mk.IV).

The spinning circle with a star was removed in the REMIX version's Nav System as part of the recolored UI. Also, the progression is now shown in the Nav System.

NOTE: The main menu is shown assuming the player neither has an internet connection nor own any vehicles, in which Go to Garage and Networking are not in the list.

All tutorials' background was updated to reflect on the change to the REMIX UI colors. Also, the blue arrows were replaced by a red wave of squares in the video for unlocking vehicles. The videos for the Class C/B/A vehicles being unlocked was extended to accommodate for the REMIX vehicles that were added.

Test driving an unowned vehicle will now start nearer to the garage, rather than a specific spot in the city.

However, the PS2 version glitches the sound if a different vehicle is highlighted/loaded.

In the Six-One-Nine Customs garage, the Nissan Skyline GT-R V-Spec (BNR34) is now blue instead of red.