These two are an interesting pair.

Both maps are odd in that they use the standard Darkside "city" music selection and graphic sets while GreyHaven uses the "castle" music and graphics. (The only town in Swords that uses the Darkside "city" music/graphics is Sand City.) The map technically doesn't match the first-person view, either, but that's due to the map graphic values for castle pathways and town water being the same. They also both keep the names of the maps they were edited from, from Darkside of Xeen... much like "Skyroad B3", which is a map the player can access normally. Oops. 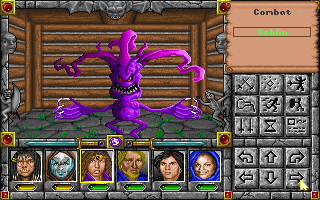 And lastly, for whatever reason, a single Goblin can be found hiding at coordinates 0, 0 on both maps… even though there is no way, outside of using Time Distortion or hex editing, to get in there. Yeah, your guess is as good as ours. 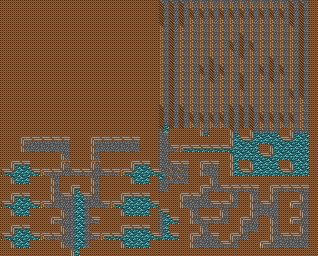 Moving on to unique qualities, Map 50 seems to be a bizarre mash-up of three completely unrelated game maps, or sections thereof. Something that's unique to this map is that it duplicates itself to the west, though the rooms shift northward by 1 tile every 32 tiles and cut off at Y 15. Once you hit X -127, the map sends you into a void that eventually loops back to the other side of the map, as is the normal functionality of Isles of Terra-engine game maps. 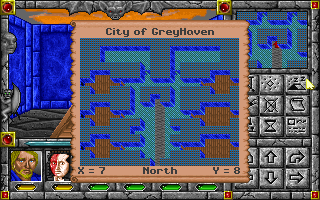 The lower-left section shares the exact same layout of the game's starting city, the City of GreyHaven, but houses none of its events or NPCs. The Oracle computers are also missing from the alcoves in the middle of the hallway. The portcullises that lead into the dragon rooms are still there and fully-functional, though. 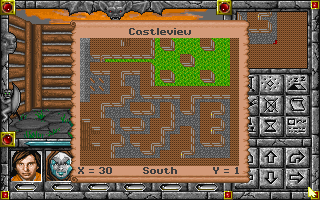 The lower-right section is from Castleview, the starting town of Darkside of Xeen. The "flooded room" was Gettlewaithe's encampment in the park and the maze was only accessible through the Castleview Sewers, in that game. Naturally, all interactive objects go missing – including Gattlewaithe and his army of Gremlins and Goblins. (They teleport into the park from 31, 00 when called by certain story events.)

Lastly, the upper-right section appears to be a copy of the Sky Platform map with its walkways replaced by town gates and its clouds replaced by locked doors. Just like the other areas, none of the scripted events or objects are there.

As for Map 51, it's just a basic clone of GreyHaven, much like the southwest part of Map 50... except that Map 51 has it shifted downward by 16 tiles. Aside from lacking anything interactive (aside from more portcullises), it's nothing special, unfortunately. 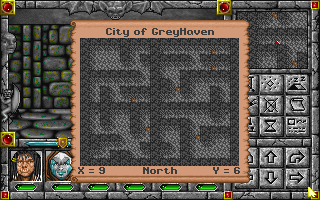 What could have been and never will be...

Map 80 (aka, "City of GreyHaven") appears to be the beginnings of a dungeon that never made it past the basic layout stage. It uses the "tower" tileset, but lacks anything of note, aside from some doors and a handful of downward staircases. Setting a Lloyd's Beacon waypoint here works like normal, but attempting to use Time Distortion to find the exit traps the player's party in the southwest corner of (0,0).

To access the map, load a save file in a hex editor and change the following values: