Might and Magic II: Gates to Another World (Mac OS Classic)

All known copies in circulation are version 1.0.4, whose owner resources date from two earlier revisions:

These are supplanted in the Finder's Get Info window by vers resources with accurate information. 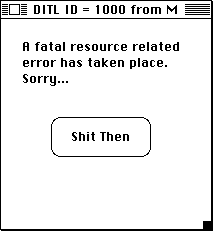 An orphaned DITL that will never be seen by end users.

The fNME resources of a freshly installed v1.0.4 point to paths on the developers' hard drives, followed by partially overwritten fragments of longer paths.