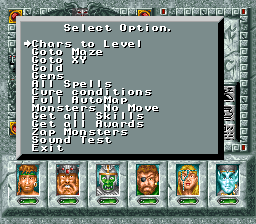 There is an extensive debug menu accessible using the mirror password "CONTROVERSY", which is also the only password which isn't stored as plain ASCII text. The "unknown destination" message will appear, but now you can press Select at any time to bring up the debug menu, which allows you to cheat in a variety of useful ways (or just listen to music, if that's your thing.) 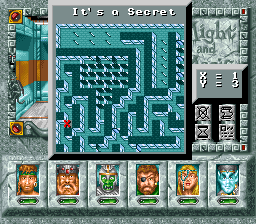 The "It's a Secret" area from the DOS version remains intact here. To reach it, use the Pro Action Replay codes 7E1C5369 and 00B13180, then take the nearest entrance or exit.

For the most part, everything remains identical to the PC version's secret area. 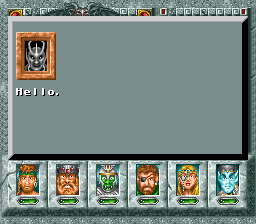 The only thing that seems to be different here is the developers' throne room; rather than each person showing their name and a personal quote, they just greet you with a generic "Hello"... 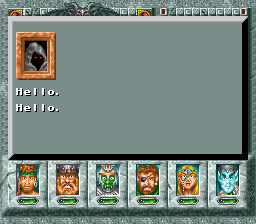 ...except for Dave Hathaway, who says "Hello" twice before dealing damage to all party members.