The sixth installment of the Might and Magic series, this game had been released after a five-year gap and is the first in the series to use an all new graphics engine with full 3D.

Thievery is a skill supposedly intended to work in a way it does in Might and Magic VII: For Blood and Honor - to steal items and gold from NPCs and shops. The skill can be added to a character.

(1 byte) is the address for the first character's thievery skill. Setting it to a positive value will add it to the character. 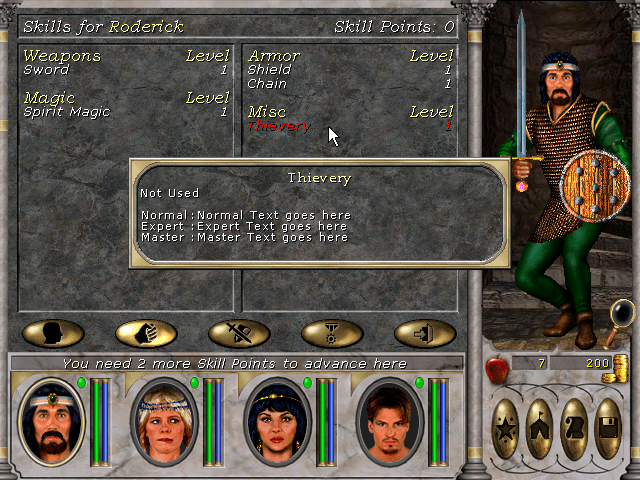 There is a hidden dungeon named New World Computing (the company who developed the game) which contains hallways and rooms that appear to resemble the offices of the company at the time. There are characters, friendly and hostile, that are named after the developers. The dungeon can be accessed by following these steps from a newly started game:

The dungeon can be looted for unlimited money (until it caps at 10,000 gold), unlimited food and bottles and various other items. There is a well which grants +256 to all stats temporarily. To leave, you must exit the dungeon and click on a specific wall outside the structure.

Looks like a copy of the map for Arena.

That is a pretty huge dungeon in comparison to the others. The entrance seems to be a hatch which can be found on a ceiling somewhere at the beginning of the dungeon. The dungeon can be split on several distinct areas. In each of the areas you get a message with some task you need to perform to progress. Here are the ones that appear:

All tasks can be completed although there is a dead-end at the 3rd section.

Tower-like area with a long staircase and multiple rooms on the top.

There are a couple ways to visit these areas:

1. Open mm6.exe with a hex editor and change the field at the address

to any of the unused maps.

MMEditor allows to open any internal map while in the game.

The Chinese version provides some debugging options, including level select.

The item Wooden Flute doesn't have any use in-game. This led to fans speculating about secret uses of the item, and a few fans formed a guild in celebration of the item. The guild, as well as one active fan who had passed away, Lord Brinne, are name-dropped in Might and Magic VIII: Day of the Destroyer. The flute in that game has the secret use of allowing players to enter the NWC dungeon in that game.