The eighth installment of the Might and Magic series.

Debug configuration remained unchanged from the previous game. Instructions and available commands can be found here.

Dragons cannot be taught spells, so this is unused.

Same deal with the other dragon's voice.

Regna does not have a spell shop, so this appears to be unused.

Most of the unused graphics are basicly leftovers imported from the previous game Might & Magic VII.

If the game can't load a sprite graphic, it will resort to using this placeholder graphic. It is named PENDING in the game files.

Possibly this was meant for a custom cursor graphic. But the final game uses the regular Windows cursor. 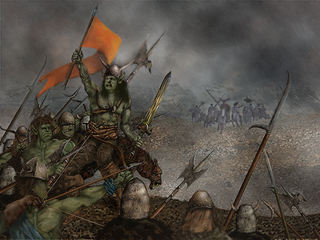 These guns would possibly have been used for the Blaster, a type of item that has gone unused.

INTRO.txt contains this introductory text of the previous game.

This status ailment was present in the previous game and the devs seem to have planned for this to be in Might & Magic VIII as well, but then scrapped it. There exist drunk finished portraits and voice lines for all the playable characters.

Global.txt contains this string, which hints that the concept of followers might have been planned for Might & Magic 8.

Apparently it was planned that you could get imprisoned.

mapstats.txt contains information about each area and dungeon, including this entry:

You can edit the game's files and access Out15.odm in-game, but it seems to be just a copy of the Plane of Water, more or less. One of the edges leads to a non existent map "out10.odm", others go to Garrote Gorge. 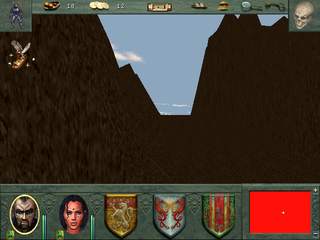 A proper tutorial level has been added in the PlayStation 2 version - see the Version Differences section.

Autonote.txt contains text detailing the whereabouts of each skill's teacher. But only this placeholder text can be found for this and the other skills. gm means Grand Master.

These strings can be found in MM8-Rel.exe.

These are some error messages possible to receive, especially when doing certain variations of the Spell Scroll glitch (using a spell scroll when indoors or when trying to enter a dungeon).

MM8-Rel.exe contains these strings, they are the names of the standard EAX/OpenAL reverb effect presets. Possibly for communicating with EAX enabled audio cards for real-time reverb effects:

NPCNEWS.txt contains this string in the 0th entry. The Lead Level Designer by the name Riki Corredera might have written this, seeing as how placeholder strings in some files read for riki and Misc Group for Riki. The message probably refers to Designer James Dickinson.

NPCGROUP.txt contains this string as the 0th entry. Might also have been written by Riki.

NPCDATA.txt shows that all placeholder NPCs have this odd name:

quests.txt contains certain debugging messages. Some of them are interesting:

IDs for items are sorted by item type. For some item types, these placeholders have been inserted until the next hundred. 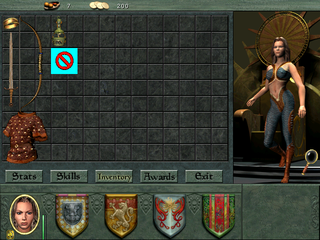 A placeholder item on the inventory screen.

If any of these is edited into the game, it will show up with the placeholder graphic and occupy 2x2 space in the inventory. Right-clicking on such an item crashes the game for the _misc items, but seems to work fine for all the other ones. Though it will only show an item description that matches the item's name, and it will say the item's value is 0. Some, but not all of the items can be sold. If thrown away, a placeholder item will show up as a sword. 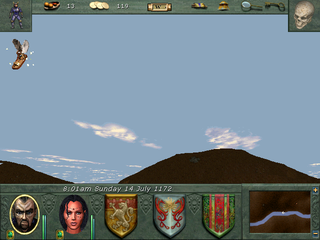 A piece of path that can barely be seen.

When northwest in Garrote Gorge, a small piece of path can be seen out of bounds on the minimap. It can also be seen in the field of view after increasing one's z-Position by memory editing. Possibly the developers intended for there to be a path coming from the West (which leads to Ravage Roaming).

The item Druid Circlet of Power can be found in the Druid Circle in Murmurwoods, but it is of no use in the game. Possibly part of a quest that was cut from the game before it was released.

The Tomb of Lord Brinne

This dungeon is a tribute by the developers to the Guild of the Wooden Flute, a group of fans who formed in celebration of the wooden flute item in Might & Magic VI which didn't have any in-game use. The guild, as well as a fan by the name Lord Brinne, who had passed away, are name-dropped. The flute in Might & Magic VIII has the secret use of allowing players to enter the hidden developer dungeon.

When clicking on the magnifying glass icon at the top while playing, you are presented a summary screen for all the characters in your party. The screen will also show your reputation (which is "Neutral") but it is completely useless as it will not change at all during gameplay. It is a remnant of the older games in the series and judging from the information above, it was possibly going to be used if the concept of stealing had been implemented.

There is a hidden dungeon named NWC and New World Computing (the company who developed the game). It can be accessed by having the flute from Lord Brinne's Tomb in Ravenshore in your possession and then clicking at the Giant's Sword in the Plane between the Planes. Inside, you mostly find large hallways and small rooms that have allied pirate characters in them that are named after the developers. 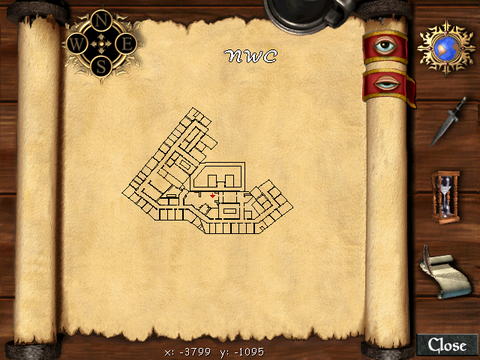 The game was released for Windows in the US and in Europe and later got ported to the PlayStation 2 for a release in Japan.

The Japanese PS2 version added a small dungeon where you are taught the basics of the game. After clearing the dungeon, you can then take a ship to Dagger Wound Island. The Windows version started you off in Dagger Wound Island right away.

All of the HUD elements have been overhauled.

The background music has been swapped for most if not all areas.