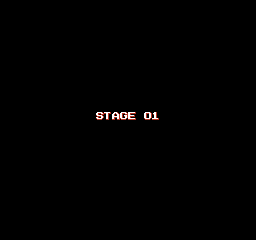 At the title screen, press Select so "Continue" is highlighted. Press and hold Down+Select (now highlighting "Start"), and press Start.

"MAST" means it's the "master" version of the game, and the numbers represent the date. So, this build was compiled on October 20, 1989.

There is an unused level feature that enables horizontal screen scrolling, making the level two times bigger! Interestingly, it seems to be fully functional; big levels can be made with no problem, the exit (but not the start) can be placed on a larger area, and the sprites do not disappear when they're offscreen.

You can test this screen scrolling on Stage 3 using the following Game Genie code:

Note: The level will be impossible to complete!

This block is also functional. Its intended use was to hold up any gravity-affected blocks, while enabling you to pass through them. Hence, there is a two-way arrow graphic on it. They are affected to gravity, and can also be destroyed. Boulders cannot pass through them, and if enemies attempt to pass through, they get killed.