The "HOW MANY PLAYERS?" screen is much more bland in the Japanese version.

The GB version's change was simpler.

They were also touched up for the US GBC version.

The title screen was made somewhat more interesting (and Rich Uncle Pennybags became even whiter!) for the US GBC release. Note that both US versions omit the option to choose the number of Game Boys.

The Japanese GB version has a Japanese title, something that was omitted from the later GBC release.

An addition to the Japanese GB version is an animation of Rich Uncle Pennybags jumping around with a property card, played every time someone buys a new property. This was omitted from the later releases. 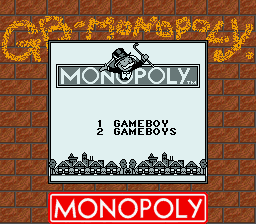 Monopoly was later re-released for the Game Boy Color in Japan and was given a few Super Game Boy features, though it dropped four-player support. There's your get out of jail free card.

The US Game Boy Color version does not have any SGB support.

The Japanese Game Boy contains various cutscenes, a few of which were also used in the NES version. However, they are not in the US version of the game.