Curiously, Plesioth and Green Plesioth materials can be obtained in the final game by fishing and Duramboros materials.

In the game data there are sprites of Versa Pietru and Makili Pietru with the purple filter used for infected monsters. Because versa pietru does not get infected at some point in his battle and makili pietru uses his sprite without the purple filter he leaves these sprites unused

Three of these unused monsters also have exclusive genes, which also go unused.

These Monsties normally go unused and can only be obtained through save editing. 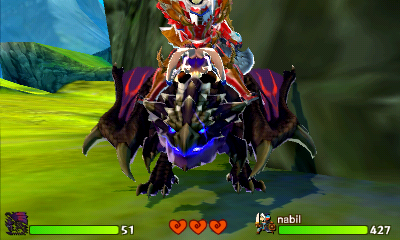 Black Ratha is normally a boss that appears before the final battle.

While listed here as a Monstie in the game's files, it was likely never intended to be used by the player as its stats are low and do not increase after leveling up. 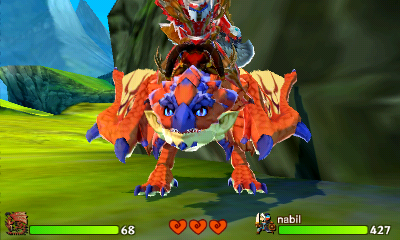 Ratha is technically the first Monstie you obtain, but due to events in the game's story you aren't normally able to ride or use it in battle until later in the story.

However, it's possible Ratha was originally intended to be recruited earlier. By using a cheat device or hacking, Baby Ratha can be added to your party. It can be ridden and has battle stats.

A copy of Black Ratha. 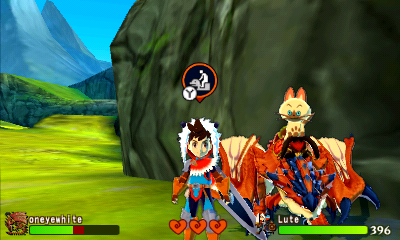 These IDs have no Monstie data associated with them and will cause the game to crash if used.

the sound of the 3ds menu banner is different in japan and west In the Japanese banner, a sound plays and Navirou is heard saying monster hunter stories. in the western version only the sound appears and navirou does not say anything

Unfortunately, only the Japanese version of the game received updates, leaving these unavailable in the international versions.