Monster World IV is the final entry in the Monster World series (until the release of Monster Boy and the Cursed Kingdom), this time taking place in a Persian-like kingdom several centuries after Monster World III. Unlike previous entries, Monster World IV was released without the "Wonder Boy" branding due to the game's protagonist (Asha) being a girl this time.

For many years, it was the only Monster World game without an official international release (although it did have a fan-translation) until its digital release on the Wii, PlayStation 3, and Xbox 360 in 2012.

One interesting item that can't be seen through normal gameplay is the Debug Armor (デバッグのよろい in the Japanese version). It appears to be the same as the Legendary Armor, giving the same +15 DEF stat boost, but checking its description in your inventory (after fulfilling certain requirements; more on that later) will prompt you about levelling up Pepe to any of the three available levels. The effect is immediate, even if you haven't met Pepe yet; it may cause glitches ranging from inoffensive (calling up the wrong animation) to game-breaking (the game hanging as it doesn't know how to proceed), but the fruit events can still proceed normally, albeit with slight visual glitches.

Note: This item is only obtainable in the original Japanese version and the 2012 official translation! The fan translations break the means of obtaining it in various ways due to messed-up pointers causing chunks of dialogue to be intentionally shortened, accidentally dummied or incorrectly allocated (the English hack never brings up the store screen, and the French hack just crashes violently when the store should appear).

Start a new game, and get to Rapadagna without talking to the Save Old Man. Before meeting the Queen, jump off the wall on the right side of the Palace entrance. You should now be in a zone with tall bushes covering Asha, but it is otherwise featureless... or is it?

An NPC is hiding in the bushes, but only if you met the requirements above. He claims to be the Magic Merchant, and for good reason! For starters, he generously gives you a whopping 9999G every time you talk to him. And being a merchant, he has stuff to sell: namely, ultimate end-game equipment like the Legendary Sword (19800G), the Legend Shield (12800G), and...the Debug Armor?? (and for 1980G, no less!).

You can also get the Debug Armor with the Pro Action Replay (PAR) code FFDE26:17FF. This will work the exact same way as the one you buy from the Magic Merchant.

Once you've bought all the items in the Magic Merchant's shop, he'll stop displaying the shop screen when you talk to him, and he'll vanish completely once you enter the next dungeon. Until then, talking to him will always give you 9999G. 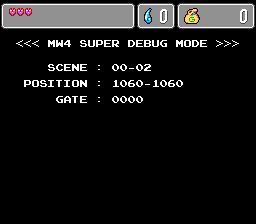 Use the D-Pad to navigate the menu, and press A or C to lower or increase values. Pressing Start simply leads you back to the game without any changes. To apply changes and perform an action, highlight the desired action, then press B + Start. One action is performed at a time, so you cannot (for example) jump to a door and change your coordinates simultaneously. 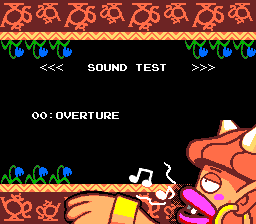 On the title screen, press Start then highlight the "New Game" option. Press Up, Down, Up, Down, Left, Left, Right, Right. This will open the Sound Test menu, which has all the BGM and SFX used in the game.

Press Up and Down to choose a track, and Start to listen to it. Pressing A, B, or C leads back to the title menu.

The track names are in hilariously bad Engrish in all versions. For example, the tracks used for bosses are called KOOL DUDE and HEAD BANGER, while the sound effect for getting a heart is...GET MEAT.

A staggering three-quarters of the title screen music goes unused, but can be heard in the Sound Test.

Monster World IV was never released outside of Japan during the lifetime of the Mega Drive/Genesis, but eventually two localized digital reissues were made.

The game made its official English debut on the Wii Virtual Console in 2012. This ROM has a text string under the header data (at 0x1C0), hinting (along with ESRB and PEGI ratings from the same period) that it was ready for release at least a year earlier.

Interestingly, the ROM inside the Genesis/Mega Drive Mini, released seven years after the Virtual Console version in 2019, contains a similar string, typos and all, but with an earlier build date:

Besides these different text strings, eleven data bytes differ between the two ROMs. Both versions have an identical, invalid header.