From The Cutting Room Floor
Jump to navigation Jump to search
Translate this page
Other languages:
English • ‎português do Brasil • ‎한국어

Mortal Kombat returns to 2D gameplay, bigger and bloodier than ever!

NOTE: The developers of the Mortal Kombat series are known to intentionally leave unfinished and unused content in their games to tease and mislead their fans. Please keep this in mind as you peruse the kontent featured here.

An unfinished version of Skarlet exists on the disc, which uses Jade's stance and Mileena's profile picture as placeholders. Also of interest is the fact that Skarlet's alternate costume is on-disc. Upon official release, the alternate costume was not included with the character and went unused, later appearing in the Vita edition.

A placeholder character with no special moves, and bare minimum playability. May have been used to test DLC character slots. Inexplicably, when selected, the announcer states "Fujin!", which may imply that the Wind God character Fujin was intended to appear. Fujin would later appear in Mortal Kombat X as a Story Mode-only character, and referenced in Cassie Cage's Selfie fatality (where Ed Boon wonders if anyone has unlocked him). He would later be added as a DLC character in Mortal Kombat 11.

Similar to the above, but uses Sub-Zero's stance and basic attacks, as well as his lifebar icon and a BUG_ME name. This character is also voice-less in-game but extracting sound files within his package reveals that he used Kano's voice clips from MKvsDCU!

Jax was meant to have a submachine gun in battle, much like his previous appearance in MKVSDCU. It was scrapped, but you can still see this gun occasionally. Two examples of this gun in action is when you do a Fatality on him and in his Test your Luck icon. The soundclips for this (also from MKVSDCU) can be found in Jax's files. In Mortal Kombat X, Jax gets his gun back in his Heavy Weapons variation.

The game has quite a ton of unused sounds. Most of them are simply leftover from the previous game, while some are just voice clips that never made it through.

The sound clips for Raiden's Electric Fly are still named after Superman.

Some characters have unused art in their respective package files. These are the characters name, done in a way that's fitting for them (Such as Jax's name being metallic). These are leftovers from Mortal Kombat: Deadly Alliance, where they were used in the character biographies.

Among the data for the Challenge Tower lies data for an unused challenge, featuring the scrapped Brutality finisher.

Nekropolis Bios for the boss characters Goro, Kintaro, and Shao Kahn exist in-game. As they are unplayable by normal means, they go unused. 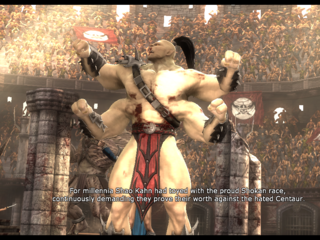 The first line of the unused ending text. The rest of it can't be seen as the credits interrupt.

Endings for Goro and Kintaro exist, yet Shao Kahn lacks one.