A pretty good port of the arcade game. Definitely more stable than the next port. 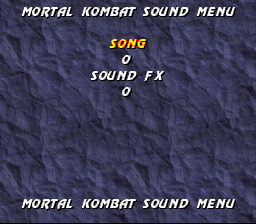 The words "SLOW" and "FAST" are stored with the rest of the option menu text at 0x02FB3C. These aren't used anywhere. There's a timer option in the Genesis port that uses these, but it's not present in this version.

No idea what this means.

These strings appear in the list of Kombat Kodes, so maybe some more KKs were planned for the SNES version.

According to an issue of Nintendo Power, the Nintendo Power Exclusive code would have stopped the timer and have both fighters take minimal damage, with the intent being like a sort of "Practice Mode".

This is apparently the name of the hidden stage (where you fight Smoke); it never appears in the game.