John Lennon's cries of his painful mommy issues made Shigesato Itoi cry, and that compelled him to throw Americana, Pollyanna, and grinding into an equally-painful game. Because he wanted to make other people cry too. That game became Mother...

...which became EarthBound Beginnings for the Wii U Virtual Console overseas in 2015, based on an unpublished English localization that had been done in 1990, to critical acclaim. There are no more tears to shed.

Two unused enemies remain in the final game: Pippi, and a possessed pillow, both with intact stats. Due to the way the game reads enemies when a battle starts, they do not have intact palettes (the palette settings are stored in the encounter group, not the enemy itself). The two enemies share name pointers with the used enemies Gang Zombie and Doll, due to appearing next to them in the game's code.

Stat-wise, the Pillow's stats are identical to the Lamp enemy fought at the beginning of the game, except for its HP, which is two points lower. It is functionally complete in comparison, just not named.

All of Pippi's stats are exceedingly low aside from her PP stat, placing her at a point in the game directly after Ninten would leave his home (perhaps she was intended to be encountered when Ninten would open the coffin she was trapped in). She also has an absurd amount of PP points, when at that point in the game none of the enemies use PSI techniques.

Their AI in battle consists solely of regular attacks.

What the hey is this? Whatever it's meant to be, it's loaded with the factory tileset.

Looks like a variation of the Guitar Man, but without the guitar.

Present in the ROM at 3FFF0.

The text string below is found in both versions. Clearly meant to be used prior to encountering the possessed doll at the beginning of the game.

During this battle, you can only Fight; the Check option cannot be selected. Despite this, he does have a unique description:

Note that, since battle descriptions are unique to Beginnings, no equivalent of this line exists in Mother.

Near the end of the game, there are two people trapped in pods that you can speak to. The game has text for a third person not actually present anywhere:

In all versions, modifying RAM address $29 will modify the items in your inventory.

The world map of EarthBound Beginnings is humongous, and a significant amount of it cannot be seen during normal gameplay. Due to its size, view it here. (Note that the ripped map does not display any objects or NPCs, only the layout of the world.)

Notably, the entire game takes place on one giant map. Several areas are spaced out with grey filler consisting of random overworld tiles.

Exploring these areas is possible using the bread crumbs glitch in the Japanese version, or by using the walk-through-walls Game Genie code (AEOTEOAP) in Beginnings. Use bread crumbs to refresh the screen once you are in the desired location, or the area will appear to endlessly loop. 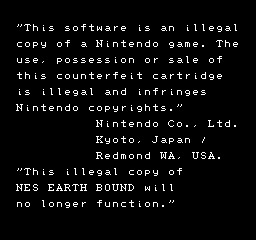 An anti-piracy measure was added to EarthBound Beginnings that checks whether the ROM's checksum has been altered. If so, the game may fade to the screen pictured at certain points:

The consequence of this screen is less severe than it states; rather than making the cartridge nonfunctional, it simply impedes your progress. Pirated copies are flagged in RAM at $0006, activating if its value is not zero.

Historically, back when Demiforce acquired the prototype ROM in 1998, NESticle, a popular NES emulator at the time, had an issue where the game would freeze whenever textboxes were drawn. Demiforce made a one-byte edit to the ROM to resolve this and added "ZERO" in white text to the title screen to distinguish the game from its sequel, which inadvertently triggered this anti-piracy screen. Later modifications to the ROM disabled the anti-piracy checks, distinguishable by a two-toned blue and white "ZERO" on the title screen.

Like the other games in the EarthBound series, a few changes were made to this game when released on the Japanese Virtual Console.

Three enemies were altered to use their sprites from EarthBound Beginnings, seemingly to avoid a higher age rating, though similar features among other enemies remain unchanged.

The Crow enemy's cigarette was erased, as in the localized version and Mother 1+2. Strangely, the B.B. Gang members were allowed to keep their cigarettes.

The blood on the Gang Zombies was replaced with a tie, matching Beginnings and Mother 1+2. The bit of blood on Dr. Distorto's lab coat was not removed.

Just like Beginnings and Mother 1+2, the dripping blood was removed from Shroudley's hands and feet.

In the Japanese version, a kid in Twinkle Elementary asks you if you've played Dragon Quest IV yet, and admits that he hasn't because he's still stuck on the third game. This text was rewritten to avoid any specific references, as was the case in the Mother 1+2 version of the game.

(In case you're wondering, the Beginnings version of the line wasn't altered, as the games it mentioned were changed to "Super Mario Bros. 7" and Super Mario Bros. 3 respectively. Hey, wait a second...)