This is a sub-page of Mother 3. 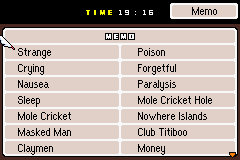 The Japanese version has an unused menu which contains different gameplay tips and background info from the Japanese manual, as well as some features which aren't actually in the final game. The menu was restored in the English fan-translation and made accessible by pressing L + R while selecting "Status". Still, many memos never get triggered, rendering them unused.

Four of the untriggered memos in the English translation are due to bad flag settings or, in one case, a leftover programming error from the original Japanese game. While the text was translated, since it couldn't be seen, it's likely that it's buggy. One of them is said in-game by a Talking Sparrow, one talks about the plot of the game, and the other two talk about an unused mechanic. All four of these can be accessed normally in v1.1 of the Italian fan-translation.

Apparently, you were supposed to find acorns to buy things in the earlier chapters instead of getting stuff for free. The nuts are probably leftovers from this concept since you can't find them after the time jump, when real money is introduced.

It should be noted that one released screenshot of the ill-fated EarthBound 64 shows a store screen with an acorn currency count, indicating this memo is an old leftover (and likely not the only one).

According to the memo, fainted party members were to be found at hot springs a la EarthBound hospitals. Instead they just stay in your party, walking around with a sullen look and 0 HP.

This is interesting in that PSI Teleport was planned, hence the part about assisting in transportation. Teleport was scrapped after it became clear how badly it broke the story sequence.

Strange, but checking the memo never tells you about new items.

Thankfully, someone marked this memo for us.

All the following Memos, as well as the ones above, can be obtained by talking to the White Pigmask in the Debug Room.

This very long memo is helpful at describing a lost game mechanic. Note the misspelling of "actualy".

This memo, on the other hand, is painfully short. It could be referencing the Barrier Trio, but the Trio never trigger the unlocking of this memo. Also notice the inconsistency/typo in the spelling of the Magypsies.

Nothing wrong here, but this memo never gets triggered.

Interesting. No "Bird of Light" is ever mentioned in the game.

This memo never triggers through normal gameplay, with the "Saturn Valley" memo triggered instead.

Another memo that never triggers through normal gameplay. The "Needle Locations" memo is triggered instead.

And another. The "Pigmasks" memo is triggered instead.

And another... Oh yeah, play EarthBound.

There are unused sprites for someone peeking out of the Item Guy's tent. This would be no more useful than a hot spring or revitalizer, which is probably why it was cut.

This is actually a comment board in the final game, but whatever.

Originally, gift boxes were supposed to be regular wooden boxes before the time jump.

From here on, the memos are pretty boring and unremarkable.

Chances are Duster is named whatever you named him in your playthrough.

It's hard to notice, but each party member only crouches 2-3 frames after the one in front of them, so telling you to wait for everyone is pointless unless you're playing in slow motion. This memo indicates that earlier in development, it took longer for everyone to crouch.

A memo dedicated to a mechanic only used twice in the entire game? Strange.

Retrieved from "https://tcrf.net/index.php?title=Mother_3/Memos&oldid=828030"
Categories:
Cleanup > To do
Subpages