Mr. Nutz: Hoppin' Mad is an unreleased Mega Drive port of the Amiga game of the same name. It was originally a game completely unrelated to the first Mr. Nutz game, and this port would have been released in Europe in 1995, but business smarts decided otherwise.

The released game was to have been titled Mr. Nutz 2, though this build retains the original name. The game's source code was leaked in 2009, and in 2012 Russian emu coder MetalliC managed to compile it into a working ROM. 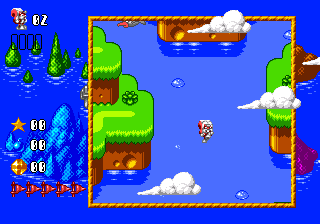 Similarly, there are early graphics for the titular character's appearance in the credit roll. These unused graphics (right) are not used in the Amiga version, and are lacking the level of shading used in the final game (left).

The Amiga version had some pseudo-Mode 7 sequences that were either replaced in the Mega Drive port (like the final boss) or completely deleted. One of the deleted sequences consists of Mr. Nutz flying erratically between rotating green planes, yet his special sprites for this part are still in the ROM.