The reset routine uses the string "NAOKI HIGASHIO" to check if the game was soft or hard reset. Naoki Higashio was a programmer from Now Production, the company that developed this port.

Of the seventeen maze layouts stored in the ROM, only eight are actually referenced in the maze pointer table, leaving a whopping nine mazes unused and inaccessible via normal means. Several of these mazes have very strange, asymmetrical designs, and one has no internal walls at all. For some reason, the data for the seventeenth maze (at $A926) is not compressed, perhaps indicating that it is a fairly old leftover.

The Game Genie codes listed below will replace the first maze with the corresponding unused maze. If you'd prefer to modify the ROM instead, change the pointer at $896A (0x97A in the ROM file) to the appropriate address. 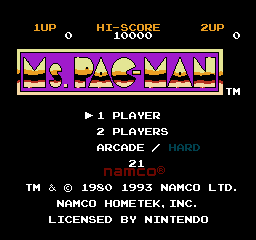 Use Game Genie code EEOGAAAA (0x40A0 = 80 in a headered ROM) to enable the debug mode. This unlocks a variety of features: 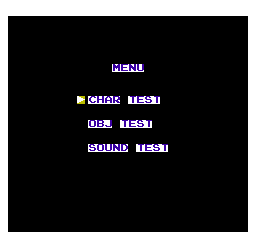 Press Select + A at the title screen to open the debug menu. 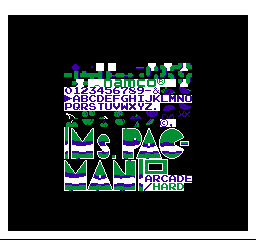 Use the D-Pad to scroll the screen vertically or horizontally. You can also change the colors, though it's a bit tricky: while holding Select, press Up or Down to select a background palette entry, and then press A or B to change it. You can edit all 16 background palette entries, though only the first palette is actually visible. Press Start to return to the main menu.

While the final game doesn't use any mappers, the CHR viewer does have some extra functionality that only works if the game is running on an MMC3 board: you can press A or B to cycle through the game's CHR banks. 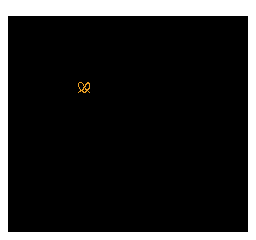 Use the D-Pad to move the object around the screen. Press A or B to cycle through objects, or Start to exit to the main menu. Note that most of the object values are invalid and may crash the game. 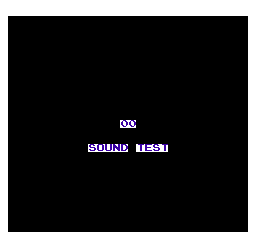 Press Up or Down to change the sound number, and A to play it. Selecting any value above 20 will crash the game.