Muppet Racemania is a shockingly solid racing game, taking most of its gameplay cues from Crash Team Racing, but injecting wacky chicken chases, stunt levels from a 2.5D perspective, almost comically sensitive controls, as well as a plethora of unlockable modes and goodies to lend it its own personality. It also boasts an upbeat & wonderfully catchy soundtrack, which is par for the course when it comes to The Muppets!

Starting at 2155C is a list of all the cars and Muppets you can choose from. Among these are all of the boss characters, which you cannot play as outside of their own stages, leaving this text unused. For some reason, Van Neuter is mentioned twice.

Some rude placeholder names found only in the European version, after the text for the credits at 0x12514

Several clips of unused commentary by Statler and Waldorf remain on the disc. These were possibly meant to be used during the credits.

These 2 quips are intended for the Mountain level, and are used as such in American releases of the game. However, European versions strangely re-use the riffs used for the Dock level instead, rendering Mountain with no unique pre-selection quotes of its own in European regions.

The save file for the European version always shows up as corrupted data when viewed on a PlayStation 2, though the save still functions properly.

In the Diner course, there is one stool you can drive through near the end. 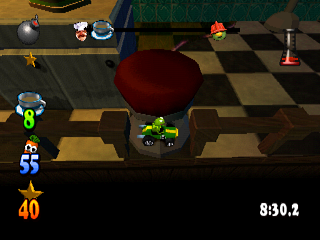 If you jump onto either of the fountains with an hovering vehicle in the Trafalgar Square course, you will be flipped over for no apparent reason. This is the only course that does this. 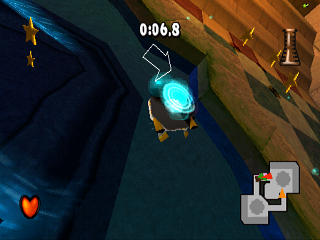 The Main Menu options are arranged differently between versions. The menu also stays centered in the US version. Additionally, pressing Start at the title screen in the US version brings up an extra menu with the options New Game or Memory Card.

In the US version, all the courses, excluding the secret courses, are open from the start. In the EU version, only the first course of each movie is open. The background is also a different color between versions.

The US version always displays the course name and best time, while the EU version scrolls through course name, best time and some web adresses related to the game. The text was also slightly changed between versions and the US version prompts you to save the game whenever you accomplish something.

The US version shows the character and car you are selecting, while the EU version goes for a more plain text menu.

The Secret Course option is a different color in the US version and shortened in the EU version.

At the start of each course, the US version displays the faces of the Muppets you're racing against.

The US version added a glow to the buttons on the "Copy the Buttons" screen.

At the start of a battle, the US version says "Battle the Muppets" instead of "Beat the Muppets".

The US version has an arrow pointing you in the right direction as well as a bit of text popping up every time you hit someone or get hit.

The wrong way warning is a different color.

Using a special move shows how many vehicles you've unlocked by doing so, with the US version also featuring the text "special move" flashing on the screen.

In the US version, whenever an opponent uses the special move, a graphic of the user is displayed. The European version displays a graphic of a horn instead.

In the adventure mode, the unlockable Muppets' and Doozer's locations are marked by their faces in the US version and by arrows in the EU version.

In the US version, Adventure Mode gives 4 minutes to explore race tracks and 3 minutes for battle tracks. The European version gives a minute less for both.

Exclusive to the European version is a set of in-universe credits at the end of the normal ones. This includes a list of the full cast of every playable Muppet as well as ones only seen as cameos.

As mentioned above, Mountain's pre-race commentary goes unused in EU releases, as the game instead re-uses the audio files from the Dock level. The US version applies these lines to Mountain, making every movie-based level receive its own unique set of lines. Another audio-related oddity is the pre-race commentary for the Muppet Labs course, which plays at a noticeably lower volume than anything else, in the EU version.