Myst: Masterpiece Edition is a re-mastered, re-rendered remake of Myst.

The Mac version of Myst: Masterpiece Edition has an easter egg in the Channelwood Age. Turn on the tank spigot, then adjust all six pipe valves to direct flow to the RIGHT fork. After this, hold the Easter Egg key (usually "~" (tilde)), and enter Achenar's Temple. A ghostly cat head should appear in the hologram display, and will remain as long as you keep the key held. Releasing tilde will cause the image to fade out. 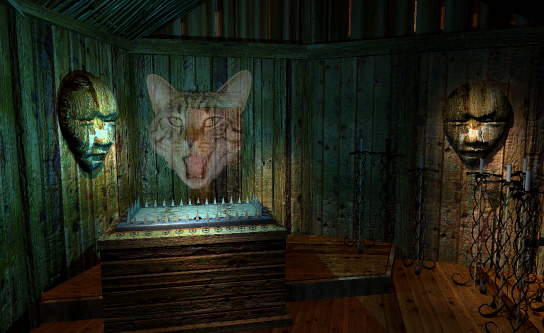 The cat is named Pepper, and he belongs to programmer Rudolph Gustafsson, who has tried to include the image in every game he has worked on.

Within the SAVEGAME subfolder of the install directory is the file SAVEGAME.TXT, which contains the following message:

The file has a last modified date of 1995-06-22 at 01:00 UTC. It is also worth noting that saved games are stored as .mys files, and saving the game will not alter this file in any way.

Present in INTRO.DAT are these alternate versions of the Myst linking book at the beginning of the game, with the linking panel replaced with each of the others in the game. 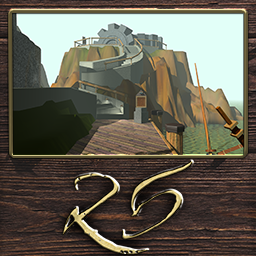 As with the other games that received updates for Myst‍ '​s 25th anniversary (with the exception of realMyst: Masterpiece Edition), the game's Myst 25th Anniversary Update added an unused ".ico" file in the main directory, named Myst.ico. Like the unused icons in the other games, this icon file is actually just a renamed PNG file, not an ICO file.