Myst is the (enrapturing|lifeless) game that (revolutionized|killed) the adventure genre. There, take your pick! 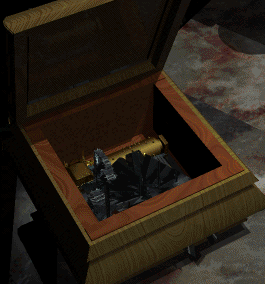 Sirrus' room in the Mechanical Age contains what looks like a six-by-six checkerboard on a small wooden platform, but was actually planned to be a music box. In the original version of Myst, PICT 2112 in MERes2 shows the lid opened to reveal the mechanism. The music box was finally implemented in 2014's realMyst: Masterpiece Edition.