Mystic Defender (aka Kujaku Ou 2) is actually a sequel to the Master System game SpellCaster (aka Kujaku Ou). In Japan, it was based on an anime/manga series localized under the name Spirit Warrior — specifically, the 1989 film Castle of Illusion.

Alexandra, the "daughter of the supreme deity" you save at the end of the game, was completely nude in the original version of the game. She was given a pink dress in the revision. This change applies to both the English and Japanese versions stored on the cartridge.

Several graphical changes were made when the game was released internationally. However, the original Japanese version is still present in the international version, and can be played by switching your console/emulator region setting to Japan.

The game was also published in Korea by Samsung as On Dal Jang Goon. This version uses a mix of assets from both Kujaku Ou 2 and Mystic Defender, along with its own unique graphical changes. (Note that the console's region setting must be set to Japan for the game to run properly.)

The title logo is different between all versions. The Korean version is styled after the Japanese version, while the English version is completely original.

The main character was given a wardrobe change, going from a white robe to purple armor.

This change of course applies to the image of him blasting the screen between levels as well.

The deity that appears when using the lightning magic was changed from a six-armed angel with swords to a three-headed dragon.

The creepy baby-like enemies in Stage 2 were also changed from flesh-colored to green.

As mentioned above, the girl at the end's sprite was redesigned between revisions. However, the girl wears a different kind of dress in the Korean version. The sprite appears to be based on the one used in the revision, sharing the same palette and some pixel placement. 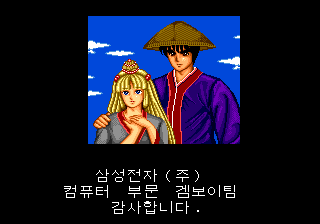 The Korean version omits the staff roll entirely, crediting only Samsung's "Game Boy" division — the Gam*Boy being Samsung's rebranded version of the Master System. The character portrait was redesigned yet again. It was also cropped horizontally by 8 pixels on both sides, presumably to make room for the new graphics.