A spiritual successor to NBA Jam, made by the same team, after Acclaim acquired the rights to the Jam name. 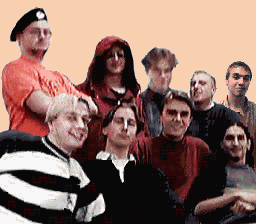 A build date and time, as well as a developer email, can be found at xC971:

"Henrik" is lead programmer Henrik Holmdahl (Henrik is second from the bottom-left in the above developer photo).

Near the end of the ROM, there is a compressed SPC sound driver and data for a piece of music not used in the game, as well as code meant to decompress the code and data into RAM. The music is an arrangement of a 1988 Commodore 64 SID tune called "Fourth Dimension", originally by Johannes Bjerregaard.

Unlike the rest of the game's music, the driver and music were both written by one of the game's programmers, Che Lalic (aka Alfatech), who also produced music using the same driver for releases by the scene group Censor Design, which he was a member of at the time. (Che appears at the very bottom-right of the above developer photo.) No other commercial SNES games feature Alfatech's sound driver or music; it is currently unknown if there is a way to hear it legitimately in NBA Hangtime or if it is simply a leftover from some point in the development process.

(Note: Normally, this song sets the SNES DSP's master volume all the way to maximum, which results in severe clipping throughout the entire track. It has been reduced here for a better listening experience.)

This song, which fits the game's style more closely, is used in the Genesis version for the Halftime Stats and Coaching Tips screens. In the SNES version, the title theme is used for the former, while the latter is silent.