NBA Jam Tournament Edition made its way to the Sega Genesis as well, joining the massive league of sports titles available for the console.

The same four unused players in the SNES version exist in this version as well, and can be accessed with one of the below codes, where xx is the ID of the desired player:

With the exception of Shaq/Duplicate Green, none of them have portraits, and their in-game appearances is that of DJ Jazzy Jeff.

Three music tracks exist which are not normally heard in the game.

With its limited instrument channels, this track fits with the others heard during gameplay.

This resembles the title screen music used in the SNES version, but in a different key and with a simpler melody.

Possibly an alternate post-quarter track. The title screen music from the original NBA Jam is reused for this purpose, in the actual game. 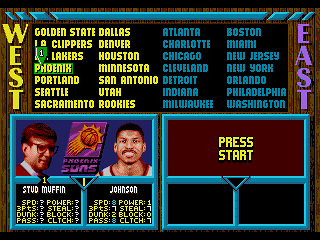 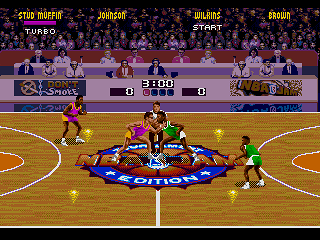 Strangely, a secret player called "Stud Muffin" requires a button code be entered in addition to the usual initials, before he can be unlocked. No other secret players require this.

At the first "Licensed by ..." screen, (this is the first screen after the Sega logo) push and hold Left + Start + C.

You will NOT receive any confirmation that the cheat has been activated, so press and release the buttons a few times if you have to, just to get it right.

With this done, go to the "enter initials" screen and enter the following:

If all steps were done properly, you will get the standard "Secret Player" message. Once you get to the team select screen, you will see that your player is "Stud Muffin".

Considering the Sega 32X version has a dummied-out player named "Fischbach" in the place of Stud Muffin, he is presumed to be Greg Fischbach. Fischbach is the founder and former CEO of Acclaim Entertainment, the game's publisher.

A similar message also appears in the 32X version.