Hello! Welcome to NBA Jam! The first basketball game released for the system.

An interesting bunch not seen in the other versions. They lack secret codes to be used. These GameShark codes will load said player after entering the 'Catling' code. 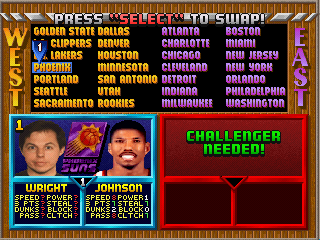 Andy Wright is credited in this game as a graphic artist. 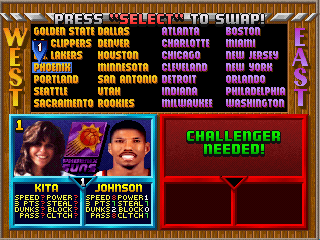 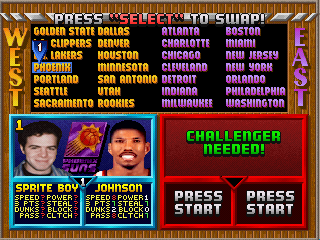 The head sprites of four removed NBA players--B.J. Armstrong, Gerald Wilkins, Monty Williams, and James Worthy--can be found at 50000, 68000, 10C000, and 12C000 respectively in the file PIN.BIN. Additionally, Rob Northen-compressed portraits of the same players can be found at 28266, 2B6D9, 41B11, and 461CC in PRESQUAT.GFX. Armstrong was replaced by Ron Harper due to being traded from the Chicago Bulls to the Golden State Warriors in 1995. Gerald Wilkins was injured for the duration of the 1994-95 season, though this didn't stop his inactive teammate Brad Daugherty from appearing in the Cleveland Cavaliers' roster. The New York Knicks have a full 5-player roster without Williams. Worthy retired from the league in 1994, well before the release of this game.