Namco Museum Archives focuses on Namco's NES releases instead of their usual arcade classics, many of which were not previously released worldwide. Notably, the collection includes brand-new NES conversions of Pac-Man Championship Edition and Gaplus.

While released internationally simultaneously, the collection greatly differs between regions.

In Japan, the collection was released exclusively for the Switch as Namcot Collection, referring to Namco's console game division that was active between 1984-95. It used a similar model to Capcom Arcade Stadium; it was released as a free download with one game included, Wagyan Land, with additional games available to purchase individually or in bundles. A physical version was also released which included the first set of downloadable games.

For the international release, the collection was bizarrely split into two volumes under the Namco Museum Archives name. These volumes also received a "physical" release in Europe in the form of boxed download codes. 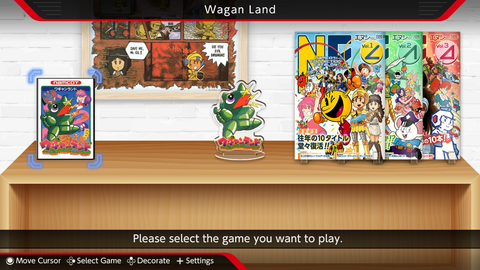 Namcot Collection features a customizable virtual shelf which any purchased games are displayed on. Each game also comes with decorations which can also be displayed. The magazines (modeled after Namco Community Magazine NG) allow you to browse for additional games, with links to the eShop.

Namco Museum Archives throws all of that away, instead using a menu similar to the catalogue from the Japanese release.

Namcot Collection includes scans of the box art and manual for each game. Namco Museum Archives tosses those out as well in favor of reusing the title screens from the main menu.

The Tower of Babel, one of the games exclusive to Namcot Collection, had its title screen changed in v3.0.1 to display the game's full name.