Also known on home computers as Spy vs. Spy II: The Island Caper, this particular version was never released outside of Japan. 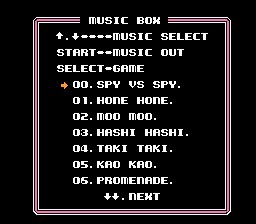 As the ending cutscene depicting a Spy returning to the submarine plays, hold at least one A and one B button on any controller. If done right, rather than presenting the results screen, the "Music Box" will appear. To select from one of 16 tracks, press Up / Down while A, B or Start will play the selected track. Press A on the second controller to reset music and pause/unpause. Pressing Select will exit the Music Box and show the Results screen.

It is interesting to note that two of the songs here, VICTORY SONG and LOVE were later used in Snoopy's Silly Sports Spectacular. 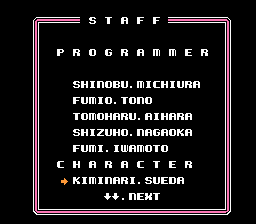 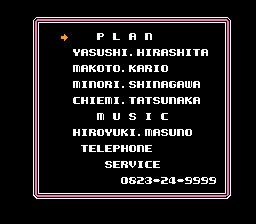 While in "Music Box", press on the second controller Right + A + B. The "Music Box" menu's text will be replaced with staff text. Display isn't refreshing automatically. So, to see the new text, change the current "Music Box" page, you'll see a first part of the staff message, then switch it back to see the second part. In this mode, you still can play music as usual.