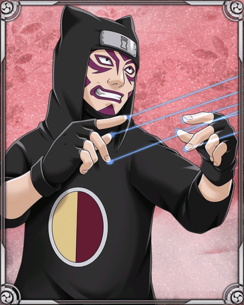 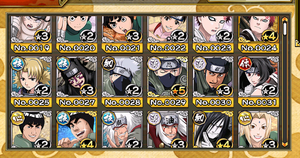 A playable character thumbnail for the Steaming Danger Tyranny, which only appeared as an enemy and skill.

An unknown thumbnail of Katsuyu that contains an unique 術 (Jutsu) symbol.

Takigakure's symbol is in the game, but there are no playable characters from this affiliation.

The icon of card no. 0281, "Kaeru no Gamaguchi", changed on October 2016 when it gained a golden variant. Also, the icons of all Sale Materials were updated to show their rarity.

The game also had several graphical changes to menus as time passed, such as the Shinobi, Shop, and Friend menus having similar appearances before receiving unique designs and the card details being revamped. The game also had varying boot screens and received a new loading screen in version 4.0.0, a new title screen, and new content from time to time.