Need for Speed: Carbon is the story sequel to 2005's Most Wanted. Although it brought back the night racing and extensive car customization of the Underground series (Most Wanted took place during the day and somewhat pared down the visual customization) and introduced touge racing to the Need for Speed franchise, it isn't quite as beloved as the previous three games due to being slightly rushed for a mid-late 2006 release and is seen as the beginning of the franchise's eventual decline until its second reboot with 2009's Shift.

According to the game data in NFS-VLTEd, these cars have prices set, but cannot be seen in the Car Lot due to their IsCustomizable field being set to False. However, setting these cars' respective fields of these cars to True makes them purchasable in the Car Lot.

Also, the Chevrolet Camaro Concept and Koenigsegg CCX are coded to be unlocked at the beginning; due to the hashes 0x000125FD (for the CCX) and 0xC2B3A220 (for the Camaro Concept) being present in frontend customization 0xa6fac6bf. If the player either removes or replaces the aforementioned hashes, the CCX and/or Camaro Concept will no longer be unlocked by default for new save games.

The node of the Tuner car lot contains an unused rewards/car_unlocks/camaro, which indicates the 1967 Chevrolet Camaro SS 396 is unlocked just by visiting the Downtown Car Lot for the first time, which is likely a test for the rewards/car_unlocks node, as the 1967 Chevrolet Camaro SS is the starter muscle car. However, the Camaro can be made unlockable if the player removes or replaces the 0xA10D3372 in the frontend/customization node, otherwise any car can be input for unlocking via just visiting the Tuner Car Lot.

Several sentences from cutscenes were either removed or shortened in the final game. Some of them can be seen in the Collectors Edition videos such as Page To Picture, Characters and On Set. Most of the dialogues can be found in the game files.

A few track names that are not used by any route are refered in language files, they could be either unreleased routes or early names for released routes:

10 heat levels were made possible, although only 8 are used in the game with a maximum of 5 heat levels in Career Mode. Levels 9 and 10 may have been dropped for design scope or technical reasons. 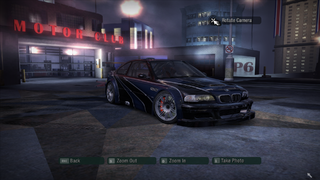 An unused preset skin for the 2001 BMW M3 GTR (E46) ALMS GT. This one is painted in Carbon Black Metallic instead of Titanium Silver Metallic.

The in-game files indicate that Nikki was going to drive a 2005 Chrysler 300C SRT-8 (LX) for Tier 1 and a 2005 Dodge Charger SRT-8 (LX) as her Tier 2 car. In the final game, she only drives a 2005 Ford GT (Gen.1), which is her tier 3 car. The player can enable the lower-tier presets using NFS VLT-Ed, either as bonus cars or as her wingman preset by using InitialCarTier1 and InitialCarTier2 and changing the preset.

Also, the Ford GT is missing it's brake discs, have it's side skirt overlaid and it's vinyl is unremovable.

Several unused textures files can be found in the game files of the retail game and the PlayStation 2 demo, although some may be leftover content from the overlapping development of Need for Speed: Most Wanted (2005).

Some of these include SECONDARYLOGOs for cars that were not in the final game, but were deleted due to the desired car list variety (two Tier 1s, four Tier 2s and five Tier 3s per car type)

Also, the BMW M3 GTR (Race) uses a generic CARSELECT_MANUFACTURER and SECONDARY_LOGO wordmark texture instead of the actual BMW logo and the M3 GTR logo from Most Wanted (2005). However, the Improvement, Ultimate, Endgame and Battle Royale Mods give the M3 GTR its logos from that game.

Several cars were originally supposed to have 5 bodykits, according to the in-game ecar data, but however, because the game would be too big for the time it was being developed, and the amount of consoles the game would be released on, many returning cars from Need for Speed: Most Wanted unfortunately only have 4 bodykits in game, with one being deleted.

The GEOMETRY.bin for cars that had 5 kits has a skipped number (eg. Mitsubishi Lancer Evolution IX MR-edition does not have a KITW01, which indicates the first bodykit was deleted likely due to optimization reasons)

However, it is possible to restore the 2005 Ford Mustang GT (S-197)'s missing first bodykit through a mod. Some mods in NFSCars.net restored the removed bodykits for most of them.

The Lexus IS300 and 2005 Pontiac GTO can get their missing bodykits and hoods back, as well as fixing the vinyl mapping issues through a restomod. This also fixes the BMW M3 GTR E46 (Race)'s body part issues, including missing roof scoops, overlapping aftermarket spoilers, and the malfunctioning Autosculpt screen on the M3 GTR (which crashes the game upon scrolling to Rear Bumper in the Autosculpt section), as well as adding a yellow headlights option, and 8 aftermarket hoods from the BMW M3 (E46).

A number of cars and meshes from the predecessor can be found in the game's resources. However, they were not completed due to the development time needed, as the publisher forced Black Box to rush the game for an October 31, 2006 release.

Some of the cars and meshes are leftovers from Need for Speed: Most Wanted.

However, these cars can be restored by an Improvement Mod, and it also adds cars that appeared in Most Wanted (2005)

Two cars from the previous titles, namely, the 2000 Lexus IS 300 (JCE10) and 2005 Pontiac GTO (Gen. 5) were fully playable cars in the previous title, Need for Speed: Most Wanted, however, due to the game being rushed for an October 2006 release, the IS 300 and GTO were rendered incomplete, with only one bodykit ported from the said title (Bodykit 3 for the GTO, Bodykit 2 for the IS 300), and with a few leftover hoods from the Most Wanted (2005).

The cars have their kit ported due to being used for their customized variant (IS300_2 and GTO_2), which are pre-tuned variants of the aforementioned cars for use in the Quick Race mode. However, the IS 300's customized variant is incorrectly fitted with bodykit 2 overlaid on top of the stock bumpers, which can be fixed using Binary.

The aforementioned cars can be fixed using this mod, which also adds customization to the 2001 BMW M3 GTR (E46) ALMS.

The Audi A4 3.2 FSI quattro (B7) was originally supposed to be a usable car. The model is fully customisable with the exception of some Autosculpt parts or refined performance. Also, due to being unfinished, the vinyls are mapped poorly.

It has five body kits although they all have missing meshes and textures. Since only the mesh of the car is in the game files, it has no performance parts.

The Cadillac CTS can be found in the game files of Carbon. The model has the same customization properties as the Audi A4 above with some missing Autosculpt parts, refined performance, and poorly mapped vinyls.

It has four body kits without meshes nor textures. Since only the mesh of the car is in the game files, it has no performance parts.

The Mazda3 is one of the unfinished cars intended for the game, The model does not have any stock rims, interior, performance parts, bodykits, nor hoods. It even causes game crashes when the player scrolls to the rear bumper in the Autosculpt section.

A model fix was made for the Mazda 3 that restores the car, by converting the hoods and bodykits from the MazdaSpeed 3, and the stock rims come from the Mazda RX-8.

It was likely scrapped due to the higher performance Mazda MazdaSpeed 3 already existing.

The Porsche 911 Turbo S (996.2)'s model can be found in the game files. Fully customizable model with the exception of some Autosculpt parts or refined performance.

The 911 Turbo S (996.2) has four body kits although they all have missing elements including headlights and an interior mesh, however, the stock body kit is made up of a single sphere mesh for the purpose of testing and refining car shader materials. Also, the model does not contain any autosculpt materials, which can crash the game if the player scrolls to the rear bumper section. Also, the car lacks a SlotOverrides entry for it's spoiler, which makes it use regular spoilers instead of Porsche spoilers. Also, due to the incomplete geometry, vinyls are poorly mapped on the aftermarket hoods.

The Porsche 911 Carrera S (997.1)'s model can be found in the game files. Fully customizable model with the exception of some Autosculpt parts or refined performance.

It has five body kits although they all have missing elements and textures. Since only the mesh of the car is in the game files, it has no performance parts, as it lacks a pvehicle and ecar node. Also, the car lacks a SlotOverrides entry for it's spoiler, which makes it use regular spoilers instead of Porsche spoilers. Also, the vinyls are mapped poorly on the 5th bodykit and on the aftermarket hoods.

The Volkswagen Golf GTI is fully customisable with the exception of some Autosculpt parts or refined performance.

It has four body kits with missing elements and textures. Since only the mesh of the car is in the game files, it has no performance parts. Also, due to being unfinished, the vinyls are mapped poorly.

It was likely replaced by the higher performance 2005 Volkswagen Golf R32 (Mk.V) during development.

There are many unused car sound entries left in the game's code. Many of them are leftovers from Underground 2 and Most Wanted (2005).

A second flag girl was cut from the PC, PS3 and Xbox 360 releases. She is still featured in PS2, Wii, Xbox and GameCube release.

Manic is a cut Crew Member listed in the game files. It is unknown which would have been their initial crew, or which role they would have in the game's story.

Certain presets are coded to have both the wide body kit (KITW) and stock bumpers applied at the same time, such as Cross’ 2006 Chevrolet Corvette Z06 (C6), the 2001 Lamborghini Murciélago Coupe from the Collector’s Edition (CE_MURCIELAGO) or the pre-customized 2000 Lexus IS 300 (JCE10) (IS300_2).

Two game modes: Pursuit Tag and Pursuit Knockout is exclusively for online only. However due to EA closing the official server on September 1, 2021 these two game modes are practically unusable.