Need for Speed: Undercover for the PlayStation 2 and Wii was the result of Black Box tossing two better entries in the series into another developer's blender.

A leftover model of the Audi A4 3.2 FSI quattro (B7), taken from Carbon. It can be seen in-game by replacing the model of an existing car, since it has no entry in gameplay data. All of its customization and performance data has been carried over from Most Wanted, therefore it lacks things like non-universal Autosculpt parts.

A leftover model of the first-generation Cadillac CTS, also from Carbon. It is only present in the Japanese Wii release of the game, and can be seen by replacing the model of an existing car. Like the A4, its customization was taken from Most Wanted, so it also lacks non-universal Autosculpt parts.

Yet another leftover Carbon model, this time of the Mk.V Volkswagen Golf GTI. Like the last two, it can be seen by replacing an existing car, has customization carried over from Most Wanted, and lacks Carbon-specific customization such as Autosculpt parts.

This unused model of a police-spec Porsche 911 GT2 (997) was intended for use by the player in the Chasedown gamemode. It uses the higher-quality model intended for racer vehicles, therefore it lacks part deformation normally present on police vehicles.

An unused police-spec Lamborghini Gallardo, also intended for use by the player in the Chasedown gamemode. It also uses the higher-quality model used for racer vehicles. A vinyl texture exists for it that isn't installed by default and can only be put on with the car customization debug menu, although it doesn't seem to work with lower-LOD models, such as the one used in free roam.

The police-spec Ford Mustang GT (S197) also has an unused "player" variant. It shares the higher-quality model used for racer vehicles, so it doesn't have the part deformation present on AI police vehicles.

An unused traffic car only present in the Japanese Wii release. The textures (and subsequently, the model) have changed to reflect the new coat of paint that was put on the in-game world.

Only present in the MOVIES directory of the Japanese Wii version are ten placeholder "boss videos". They each feature camera footage of a laptop screen with text-to-speech placeholder audio.

Also only present in the Japanese Wii release are exactly... fifty copies of the Electronic Arts logo bumper commonly used in games from 2005 to 2006. The filenames have been changed to match the language of the trademark disclaimer displayed at the bottom, although some videos lack the text altogether.

Additionally, the Electronic Arts logo used in ProStreet is also present as EA_BUMPER_WS_ENGLISH_NTSC.vp6 in the MOVIES directory.

In Autosculpt, after choosing any item except wheels, the text "Missing String" is printed above the top-center part of the screen. While not normally visible, it can be seen if the game is hacked to run in widescreen. 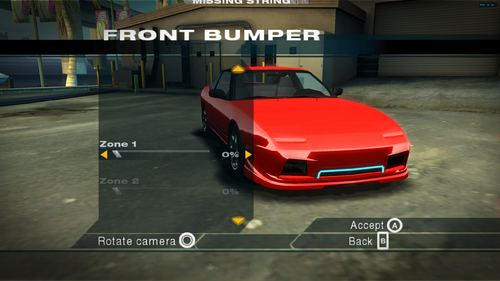 Undercover and Carbon are very similar on a technical level, so much so that it's possible to directly replace the world files with the ones from Carbon and have the game start. The water isn't visible and certain textures appear purple due to a missing material. Doing this makes the game very unstable and prone to crashing.

All Wii releases have an .ELF file with debug symbols and a copy of main.dol that are both named after the game, region, and stage of development, located in the root of the disc.

However, in the Japanese Wii release, many more leftover files related to the game's development on the Wii are present in the root of the game's filesystem, each of which were made at different stages in development.

These files can be opened with any text editor. They contain a list of all of the files burned to the disc along with their hash and the directory on the computer in which they originated from. The first few lines from all files have been put here.

A few files were added or removed in the time between the creation of NfsMWJapan.dlf and NfsMWJapanMilestone.dlf.

Between the milestone and release file lists, only one file was added, specifically NFS09_FMV1_japanese_ntsc_old.vp6, located in the MOVIES\WIDESCREEN directory.

These files contain everything necessary for the game to boot, all put into one large file. They seem to be game executables only meant to run on developer hardware, since trying to boot the game with them in Dolphin results in the debug log throwing an error.

Additionally, the header for these files all refer to the game by its codename (Most Wanted 2) and share title ID's with the American version of Need for Speed: Carbon.

These are referred to as the RVL_CONFIG_FILE by the file list. They share the same header as the DSF files and are all the same size. It's unknown what these files do.

The file bdnf.txt in the root of the game's filesystem denotes the platform, region, date of compilation, amount of changes made during development, and the debug map file. The seemingly hasty copy-paste errors are part of the original files.