Better known by pretty much everyone at this point as Gradius. Your precious Konami Code can't save you now!

This square-shaped robot has what looks like a diamond-shaped pinball flipper. Seems like it could shoot out bullets, maybe? Sounds about right.

Another unused enemy design that kind of looks like a pinball bumper.

Text in the test mode screens uses palette 0A in Gradius and palette 00 in Nemesis. It's not clear if this is a bug or some kind of attempt to make the text more readable. If it's the latter, they missed the Demo Sound and Coin A / B dip switch variables.

In the nemesisuk set, the text "EVERY BONUS", used for subsequent bonus lives, was rewritten to the more accurate "AND THEN EVERY".

In addition to the obvious title change from Gradius to Nemesis, the title screen in the overseas version has a background that the Japanese game doesn't.

Players start with 3/4/5/7 lives in gradius and nemesis, depending on the how the "Lives" dip switches are set. In nemesisuk, this was changed to 2/3/5/7 lives. 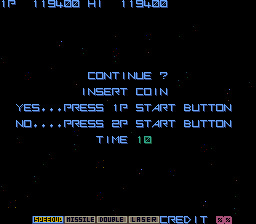 The nemesis set is the only version with a Continue feature. In gradius and nemesisuk, losing your last life means you're dumped back to the title screen, this is also the case with nemesis but only after continuing 3 times.

Note that in nemesisuk, the text for the continue screen is still in the ROM, unused.

The orange orbs that follow and fire with the ship are called Options in Gradius and Multiples in Nemesis.

Changes that make the boss fight portion of each stage take less time.

In Gradius, the volcanoes will first erupt slowly, then speed up every 128 frames. Max speed is reached at 512 frames.
In Nemesis, they will erupt just once at the slowest speed before suddenly switching to the fastest speed.

Both TimerVar, BonusVar, and OptionsNum are set to 0 at the start of each game loop.

Bonus Life Settings
The score thresholds for extra lives are higher in nemesis:

Enemy Layout Changes
There are a few changes in enemy placement in Stages 1 to 3.

At the start of the main area of Stage 1, there's an extra Uros enemy on the ceiling.

Three extra Ducker enemies are on the ceiling in the middle of Stage 1.

The last enemy section before the large rock wall in Stage 2 has nine green and seven red Dee-01 enemies in the original game. nemesis removes two of the red Dee-01s, meaning there's less opportunity for power-ups, adds three more green Dee-01s, and places more of them at the bottom of the area.

The very start of Stage 3 is much more populated in nemesis, with three orange and four normal Garun ships. Three of the four Garun enemies on the right were removed, and the remaining one was repositioned.

Two more Mother enemies were added to this area in nemesis, bringing the grand total up to three. The last three Garuns were deleted.