The first game in Konami's Gradius spinoff series on the MSX, being merely a port of the arcade version with an extra stage and some bonus stages thrown in.

In Europe, the game was released as Nemesis. Note that the game itself features region detection for both regions, and will display the appropriate title depending on the region of the system detected.

When Gradius was rereleased with Konami Game Collection Vol. 3, like the other games included it was enhanced with SCC support (specifically just for the Sound Cartridge bundled with Snatcher). However, just like with TwinBee, it is one of two games where both music and sound effects were upgraded, rather than only the music like with other titles in the Collection series. Additionally, the music and sound effects use both the SCC and PSG simultaneously, rather than just the SCC only.

While the original PSG music for Gradius featured no percussion, similar to the arcade game's soundtrack, the SCC version completely overhauled the soundtrack to add percussion from the PSG in a similar manner to Konami's other SCC-enhanced MSX games at the time. 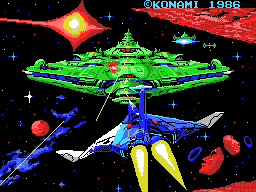 Hidden in the lower-right corner of the opening demo screen are the names "NAOKI" and "YUTAKA". This is in reference to the two lead developers of the MSX port, Naoki Matsui and Yutaka Haruki.