Released by BioWare, Neverwinter Nights was a Dungeons & Dragons 3rd Edition role playing game that heavily relied on community content, thanks to its included toolset. It had three expansions: Shadows of Undrentide, Hordes of the Underdark and Kingmaker. 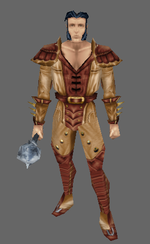 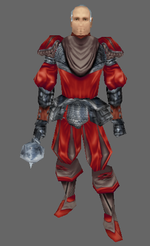 
An early version of Desther is present in the game files, which looks noticeably different from the final version.


A rather simple test creature taking the appearance of a Hook Horror.

While in the Source Stone, the player would've been transported into a false alternate reality where they were the leader of a slave resistance against the Old Ones. Quite a bit was left over from this concept, with only the areas and the dialog missing, indicating the plot was pretty far into development before it was canned.

[0010]
This entry presumably would appear in your journal when the player entered the trap.

[0020]
This entry would've appeared once the player escaped the trap.

He has a conversation loaded (m4q01c08past), but the text, if there was any, has been erased. He's equipped with a Warhammer and a Key unique to this plot, analyzed in the section below. He uses a generic template (Male 02).

He has a conversation loaded (m4q01c17wilb), but the text, if there was any, has been erased. He is equipped with only a Battleaxe. He uses a generic template for appearance (Bartender).

Interestingly enough, most of the unused items in this game are classified as "Unfound" within the comments.

This notebook would appear in the player's inventory once they entered the trap. It uses a default portrait.

A simple note about a conspiracy. There's no reference to a character named "Beldar" anywhere else in the game.

This is the key Gedry would give you that would ultimately help the player escape the trap.

This is probably the same key as the above, but meant to be seen from outside the trap.

This...rather strange .utc file can be found when the module for Chapter 4 is loaded. When summoned in-game using the dm_spawncreature function, he appears with the default human skin without any armor and is equipped only with a dagger.


What otherwise seems like your generic run of the mill badger has a defeatist twist. It has a script, labeled "JUNK_JUNK", that has it say the string "Game over" on every heartbeat. It's unclear if this pessimistic animal ever had a purpose.

Hordes of the Underdark

The second response requires a high intelligence check. If the player does choose to go with her however, a short cutscene is played, after which the player finds half their gold removed.

Early placeholder text appears at the beginning of several of the game's dialogue files, mostly for the dev team to keep track of what files were used where. While most are just placement descriptions, one in particular stands out:

In addition, there were several early text entries for endings in dialog.tlk, in particular relating to the Knowers. You only meet two such Knowers in the game, and there's little further info as to what was planned: