This is a sub-page of New Super Mario Bros..

It seems like the big moving mushrooms were anchored to their sprite locations differently in early versions of the game.

The level was designed for use with an early version of the grassland tileset - before the mushroom tiles were deleted. 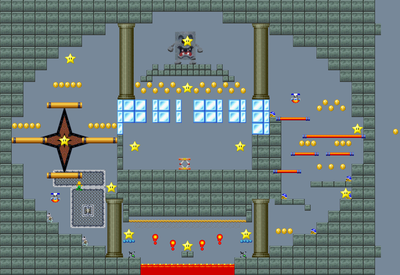 Includes a really wide variety of objects (even the unused pillars, a Giant Springboard and lava tiles). No sprite set combination exists that allows all of the sprites to show at once.

This level uses an unused "multiple backgrounds and tilesets per area" mode, which does not work in the final game.

The stage is a grassland area split into three views. Players were supposed to use doors as a way of getting the stars before their opponents.

The second view, a bonus room with many coins, was probably meant to use the underground tileset. The third view uses climbable vines as a way of crossing a chasm.

Just like Unused Level 1, the level was designed for use with an early version of the grassland tileset. The Chain Chomp is a variation that causes the game to freeze (and corrupt the background even more) when Mario/Luigi gets near it.

This level appeared in a show demo at E3. The second entrance would be for Luigi in the demo's multiplayer.

Almost every block in the level contains a power-up. Again the sprite sets are wrongly configured.

Located at the end is an old style staircase and flagpole. The flag is above the view and even if you move it down, the flag does not fit onto the unused pole correctly. Also, for some reason, the pipe cannons are no longer there. You can see the unused level in action here.

A really long sand level also seen at E3. The flagpole uses the same setup as Unused Level 4. The midpoint rings were removed since E3 - and you can in fact see this level in pre-release screenshots of 2006 build(s) that likely didn't use the midpoint rings. If you count the sprites in the E3 version of the level that don't exist in this version, excluding the midpoint rings, it matches up with the number zeroed out sprite instances, if you exclude the midpoint rings. They even fit into the groups of zeroed out instances you can see in the level data - four (Pipe Cannons), three (Piranha Plants) and one (! Switch). 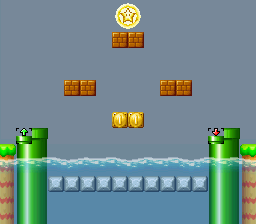 An unused Area 3 for World 1-A, World 1's water level. It is only present in the USA version (which was the first built release) and only the bgdat (tile data) file exists. The pipe/block layout is similar to the one in the 2nd Star Coin room in this level (which is in Area 1). The only tilesets that fit are the two bonus room tilesets, but given that it was for a water level, and seeing the general structure of this area, it can be surmised it was meant to use an early underwater tileset. The pipe on the left is breakable/movable if you are Mega. Oddly, some of the tiles in this Area extend off the level "canvas". 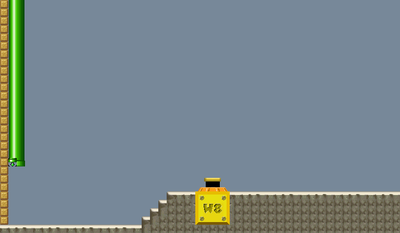 This cannon is different to the other cannons in the game: The background, instead of a world-themed foreground and destination-themed background like the other cannons, just uses two mountain backgrounds. The cannon leads to World 8. It would have been used in World 6, judging by the tileset, background and filename (F12_1.bin and F12_1_bgdat.bin).

The music is set to 00 (Mario vs. Luigi), which isn't played in any of the used single-player levels. The reason for this is that 0x00 is probably the default value for the music in Nintendo's level editor.

The player starts off by coming out of a pipe next to a wood-block wall. This suggests that it was part of another level, entered from another level via an unused feature or the area overflow glitch, or entered from a pipe on the world map. You can see a video of the level in action here.

Retrieved from "https://tcrf.net/index.php?title=New_Super_Mario_Bros./Unused_Levels&oldid=1006572"
Categories:
Cleanup > To do
Subpages