NiGHTS into Dreams... for the PlayStation 2 is an enhanced remake of the cult classic Saturn game. It was released around the same time as the Wii sequel, Journey of Dreams. This version was later ported to Windows, PlayStation 3, and Xbox 360 as a digital download title in 2012.

Several cheats can be inputted at the Press Start screen. Press the following button combinations for a desired effect. Note that for the Windows version, Circle and X will be swapped (but not for the PS3 version, which while swapping them in all other menus, keeps them intact for cheats).

The following set of cheats only have functions in the PS2 version of the game. They still exist within the later versions, but all functionality to them has been stripped.

The below message will be displayed if you input a cheat that cannot be used anymore: 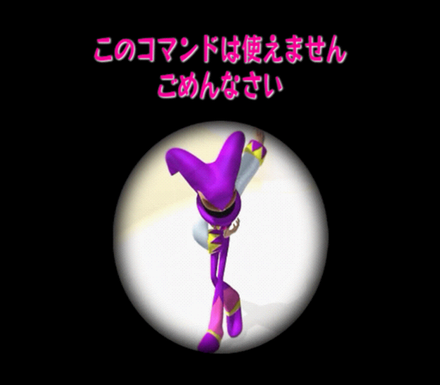 Additionally, the DSS info (likely Dynamic Song Select) from the Saturn version is present in all versions of the game. Pause the game and press L1 + R1 + Triangle to display the below info on-screen: 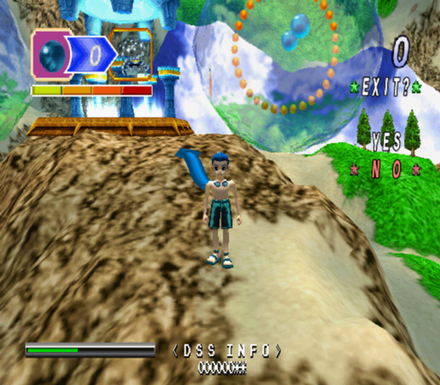 Additionally, there is a test stage-definition stage_test_sdf.bin which is a test flight path that causes the game to crash when loaded into a normal stage, but functions properly when swapped with a boss fight's flight path. This path is a small rectangle with rounded corners, and has no objects placed in it. A video demonstrating what this looks like can be found here.

Inside the game is an unused music file named halloween.adx. This would have likely been utilized by the aforementioned Halloween Mystic Forest.

The hint for Jackle's boss fight shows a number of different tarot card designs. Only one (the first in the image below) can be seen in the boss fight, but all of the card textures still exist in the game's data.

Among the game's data are 153 files with names such as GAMEUI_GALLERY_001.BIN, where 001 is a 3-digit number. All of these contain 8-bit bitmaps in an unusual, scrambled file format, and go unused in the Windows version. Most of these are simply 8-bit versions of images from the in-game gallery, but 6 of them (GAMEUI_GALLERY_090.BIN to GAMEUI_GALLERY_095.BIN) contain unused merch images, originating from the gallery of Christmas NiGHTS into Dreams....

Although the Windows version has its own set of gallery UI graphics, the PS2 version's UI is still present in the game's files as GAMEUI_GALLERY.BIN. 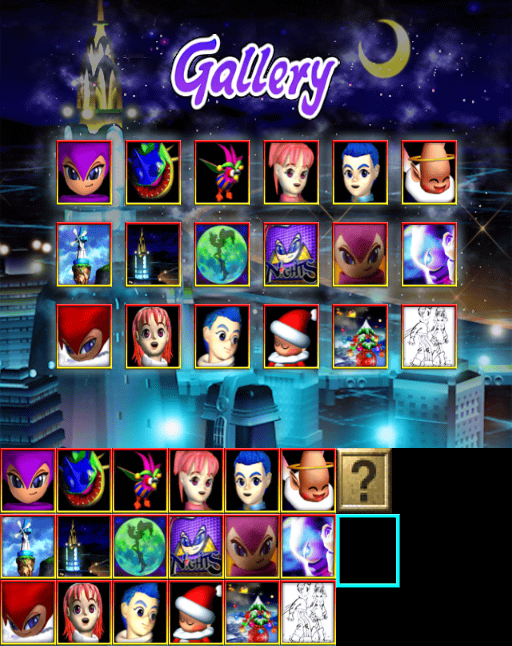