A more beautiful Dragon Quest IX created with Studio Ghibli × Level-5 teamwork. It comes with a magical book, which made sure it never got exported... until the PS3 remake. A fan-translation in English is also available along with the magical book being translated too! It is also one of the few Nintendo DS games that is on a 512MB ROM cart (Many of these games which were only made in Japan), making this one of the biggest Nintendo DS games ever. But with that big file size, also means a lot of cut-content of course.

There are a whopping 15 unused rooms in this game. Through file-swapping, one can load their geometry (though not their NPCs), and it seems to be a rectangular grey area, but they have associated dialogue, consisting seemingly of menus for debugging functions.

This game has a debug font, "debugx8p": It consists of a set of very small English letters, not pictured here. 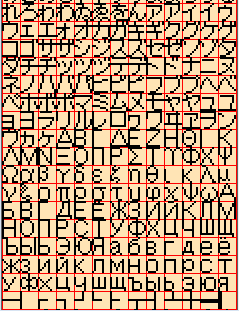 The standard font for regular messages has, as usual, the kana, kanji and Latin letters which do not include the accentuated European characters, and have two sets: a fixed width and a variable width one: Many Japan-only games include them, suggesting it is a standard font in the Nintendo DS SDK.

Oddly enough, unlike in earlier DS games, complete character sets for the Cyrillic and Greek alphabets can be also found. The first game released on a Nintendo handheld in Russian was Pirates of the Caribbean for the Nintendo DS, albeit other translations were incredibly rare. This inclusion of fonts including these languages in the SDK may hint at more Russian releases having been planned for the Nintendo DS. As for the rest of Eastern Europe, including Greece, proper releases have yet to be seen.

These are the missing two buttons. They have another "pressed" state frames.

Remains of the original plan to include the book in the game are still in the final: The book is the only plot item for which you can press the button "Use", but it shows a message telling you to check the physical copy.

These are textures destined to show up during a battle, and come in two flavours: "Ambushed!" for the orange one, and "Preemptive Attack!" for the blue one. There is a smaller size variant too. Their internal names are InitiativeEnemy and InitiativePlayer, but they go unused in the final game, where simply an exclamation mark appears above the disadvantaged side party members.

These graphics were however upgraded and used in the PS3 version.

The spells below are stored in the ROM but they are not used in-game nor are they in the enclosed physical book. Conversely, some of the spells in the physical book don't have matching graphics within the game's data.

The first two spells were used in the TGS 2009 demo. 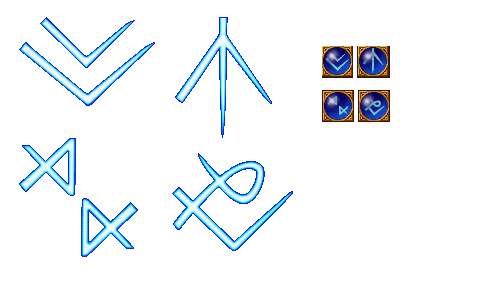 Some odd graphics for when Oliver visits a dungeon or town for the first time can be found. They are drawn in a style different from the ones used in-game (which are plain white text) and one of them even has a red stamp with the kanji for "temporary". This graphical style was used in the TGS demo, here.

They are Basiruna and Nielde desert. While the first area is never referenced in-game, there is a desert area, but it is in the overworld which never has these messages appear. 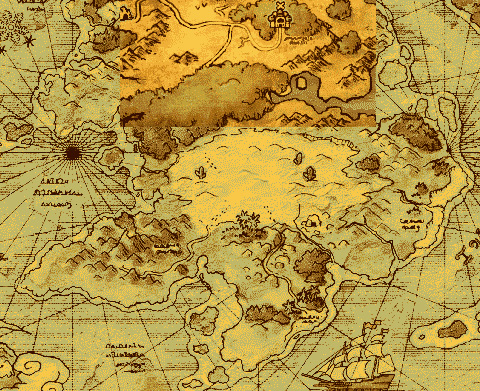 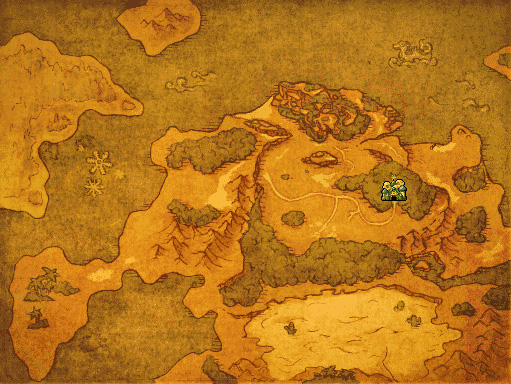 These minimaps (which should appear on the top-screen) are left-overs of early versions of existing area maps that must have been hastily drawn back when the graphics weren't finished yet.

Though stored with the rest of the graphics of the top screen (including minimaps), this image gets unused in the final game. 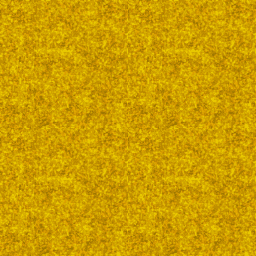 After the TGS 2009 demo (called Level-Five Premium Platinum and including Inazuma Eleven 2 and Layton 4, here), another short demo of the game was shown by Level-5 a few months before the release of the game at the Tokyo Game Show 2010 (which is like the E3 is to the US). Many of the graphics used for these demo versions are still buried in the retail version.

There was originally a Skip Movie button on the bottom right of the Anime/CG cutscenes in the TGS 2010 demo. It was removed in the final version for being too obstructive, and was replaced in its function by the Start button. The Japanese writing stands for "Next".

The Title Screen for the TGS 2010 demo. Notice the "Demo Version" yellow writing below the main title. 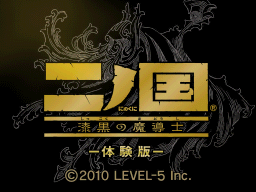 Some English credits in an odd white font on a black backgrounds reading: "LEVEL 5", "STUDIO GHIBLI", and "JOE HISAISHI". They were used in both demos.

Some instructions, and graphics for basic spell tutorials for the upper screen are available. The Magic Master was present in-game in the TGS 2009 demo, but these are upgraded versions. Obviously, you won't see them, as you need the physical Magic Master for these in the final. 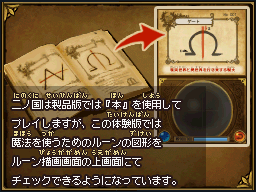 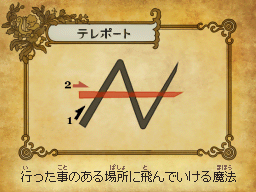 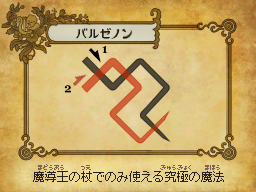 The screen reading "Congratulations!" from the TGS 09 demo, alongside the FMV snapshots used in the ending is also still in the final. 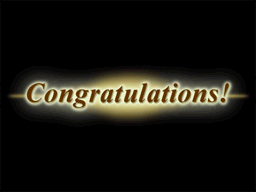 A screen which would be played at the end of the TGS 10 demo. It roughly says: "Wait For The Upcoming December the 9th, 2010 Release" and is different from the one used in the TGS 09 demo. 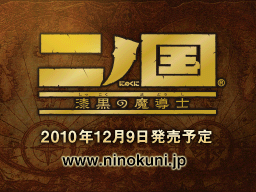 These buttons would be on the title screen of the TGS 10 demo. About the second option, Bickiny is the name of the town where Oliver and Maru get their Genie Pot and meet Jiro then get the ship, after some boss battles.

Due to the game using FMV cutscenes in the introductory segment, these sprites are never used, except the one at the bottom-right corner. For instance the one with Allie having a pink vest over her shoulders: She has them in the animated cutscene only for seconds! Some emotions do not match however anything used in the game: it might hint that the last moments of Allie in the hospital from the PS3 flashbacks were to be shown in the DS version as well. 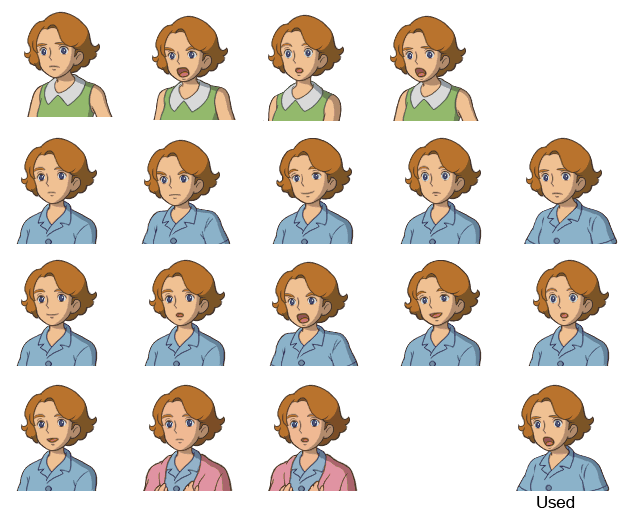 Oliver in an emotion-less state (empty eyes). Note that he is normally the one able to cure people afflicted with this disease, and he doesn't at any point in the game get into this state (Maru and Jiro, his two party members, do).

Ari's only on-screen appearance as a wizard is that of her getting fatal injuries, using only two yelling sprites, so most of her sprite work is unused. The PS3 version offers her more screen-time in this form. The same applies for her young self, for whom some elaborate backstory might have been planned.

All of the below sprites go unused in the final game. 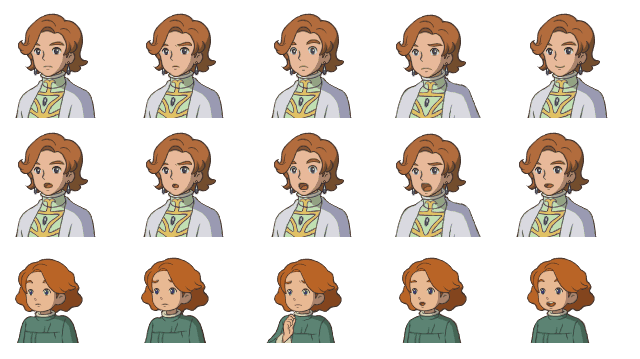 As for Jabo/Natius, the final boss, only the last two sprites above are used in-game in the DS version (here): the smiling one appears exactly once! The way the cutscene was really intended can be seen in the PS3 version (here). 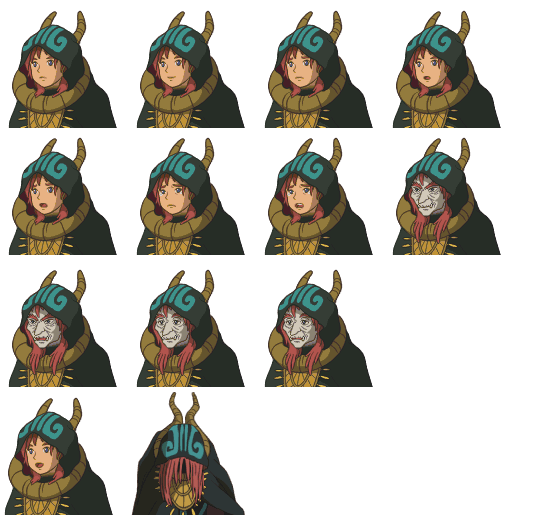 This text is the ending script of the TGS demo. It is stored alongside the ending graphic above. It seems Shizuku would congratulate the player if he manages to finish the 15-minutes TGS demo, or apologize to him if he hasn't finished in time.

The ending lines basically says "It was fun, eh?" and then tells the player to look forward to the full game, planned for a December release.

The messages are in casual Kansai-ben, a dialect of Japanese that's about as understandable to students of Kantou-ben (Tokyo standard) as a thick Alabama drawl is to someone who learned English from a British textbook.