Nicktoons: Attack of the Toybots is a platformer starring the Nicktoons. And lots of (painless) deaths.

It's perhaps most notable for featuring Stimpy and Rocko as playable characters, complete with Billy West and Carlos Alazraqui reprising their respective roles.

Present in the GUI folder are .trb files containing the .tga files for all the Master Model graphics. These include a number of unused ones, nearly all of which relate to characters from KaBlam! and Action League Now!. 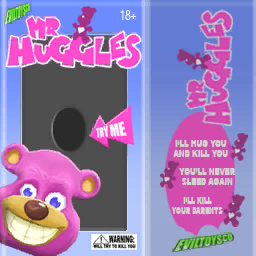 Since you can never see the back of the Mr. Huggles box in-game, the developers took advantage of this by putting a creepy hidden message there.

Taking a closer look at the front of the box this way, one can also clearly see it is labeled “18+” and “Warning: Will try to kill you”.

There are folders named A0_Test_Drew, A0_Test_H, A0_Test_Rob, Bonus1_Sponge, Bonus2_Danny and Bonus3_Timmy that, judging from their content, include levels used for testing that are unused. How to access them is currently unknown.