Through the game, there are some inaccessible secret passageways, which are probably level design errors due to tight release schedules. 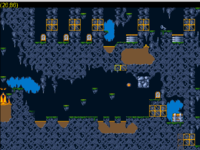