Both versions have their own snippets of leftovers. 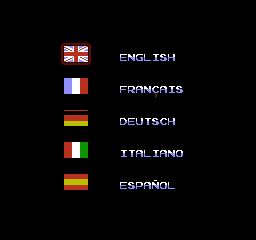 The US version contains the same translation resources of the European version and are fully functional, including the Language Select menu. Game Genie code TPOZPSTA will re-enable this menu. Note that the US language resources are most likely an early revision of the European ones, as some of the messages aren't translated or contain errors.

Despite neither version using the different languages for the initial logo and title screens (in the European version, the Language Select menu only appears after pressing Start at the title screen), there are a full set of title screen text resources for every language in both versions...although really, only two lines of text are actually changed – the "PRESENTS" below the company logo, and "PRESS START" on the title screen.

Use Game Genie code PEUGPAAA, ZEUGPAAA, LEUGPAAA, or GEUGPAAA in either version to see the French, German, Italian, or Spanish titles respectively. The Italian and Spanish logo texts are identical.