This is a sub-page of Normality.

Normality is one of the most richly-textured early-to-mid-90s Doom-style 3D games. As you'd expect, there's a couple of extra little things that fell by the wayside during development.

Interestingly, all textures in the game not only have a name, but also a description, likely as reminder for the level designers for where they were supposed to go. These descriptions can often give a good hint for what the unused textures were designed for.

There's a texture here for visible radio waves that were supposed to come out of the gizmo. This texture is also found in the Plush-Rest Reception area.

The landing with the sinister robot just outside of Kent's front door has an unused texture for a fire door.

There's an unused line of text where Kent seems to be describing it:

The factory interior textures include an unused version of the belt from the ducts, probably an older version. You were possibly originally meant to find the belt in the main factory area.

The Paul Nystalux portrait in Tiddler's office has an earlier version hidden in the files for the ducts map. You can only see a tiny little piece of Tiddler's office from inside the ducts, so this is not visible from your vantage point.

Although the unused texture is never visible, the old portrait does appear in a very short cutscene in which Kent steals the debris from the alarmed case: 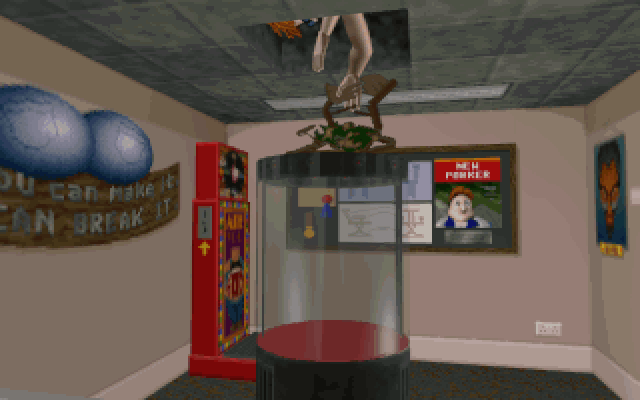 There are two unused textures for a safety barrier.

BARRIER2
Side of Safety barrier

The rusty spot on the top of the container has an alternate version with a hole in it.

There are voice lines present of Kent talking about how the rusty patch collapses inward to make a hole. There's no way to actually do this in-game, though.

Also, apparently Brian was supposed to have a mug. It's nowhere to be found, though, and doesn't get reused anywhere else in the game. 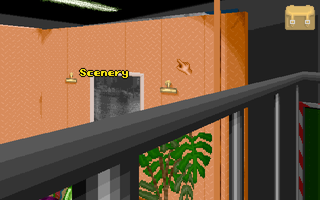 The edges of the texture are just barely visible behind the scenery.

Although all textures are technically used in the map, these two textures of a skyline cannot be seen since they're right behind the scenery on the set. 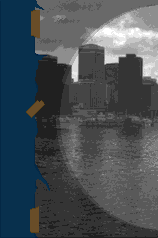 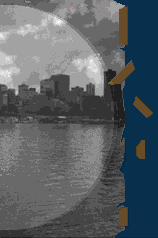 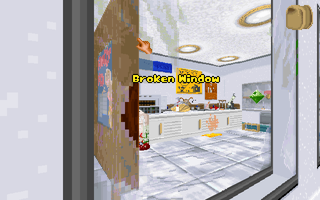 The position of the calendar.

There's a sexy calendar behind the whiteboard containing evidence of your crimes.

Again this is technically not an unused texture, but it's very difficult to see in-game due to its placement. 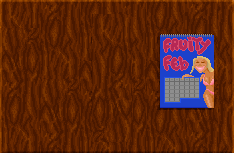 On another note, the whiteboard is called a blackboard in all related texture descriptions, indicating it might originally have been that before being changed.

The prison mostly has textures that appear to have been replaced by cutscenes in the final version of the game.

The orifice that takes you to the mood filter has an "open" position for the capsule to fit through. This is never used, as the capsule only comes and goes during cutscenes.

The following textures were likely meant for when the cell gets flooded with gravy. In the final version, this is displayed in a cutscene instead, and you're returned to a cleaned up cell afterwards.

The book that Kent uses to smash a hidden camera in the prison guard version of the section has two extra textures. Again, an action that's only shown as a cutscene in-game, so only a closed book texture is ever seen.

There's also this texture that was evidently meant for the food tray in the Norm staff room (which we know thanks to the internal description). The food station can't be used in any way other than to destroy the bugs. 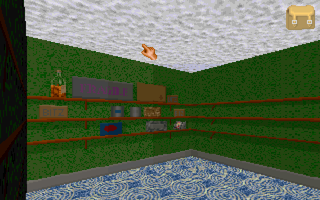 The storage area inside the TV shop is actually partially textured, even though it's inaccessible and the only way to ever see it is by clipping out of bounds. Even the parts that are textured look somewhat unfinished.

It's possible you were meant to go in here at some point, especially since the room includes a key for the door leading to it. You can lock the owner in here when he goes to fetch you a remote, but that actually doesn't affect anything. Additionally, it might have been intended to be visible only from afar.

This texture is visible only in the first version of the hideout, before you're allowed to move around freely. Although it's not technically unused, you never see this texture up close enough to make out that it's James Bond actor Roger Moore. 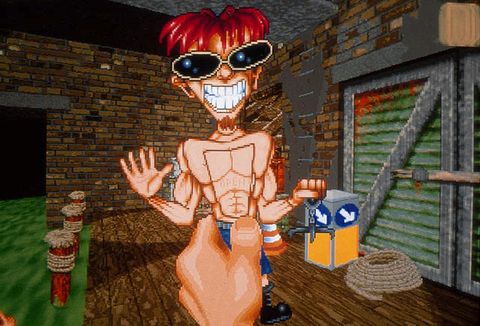 The rope object, as seen in a prerelease shot on Gremlin's website.

There's a rope texture in the files that used to be an item according a prerelease screenshot. It was potentially used for creating the raft, instead of the rope from the MINT Mall.

A copy of this rope texture can still be seen (but not interacted with) in the Plush-Rest Factory, behind the door through which you can see the factory machines creating furniture.

The blue box that you find in the traffic bollard actually has a texture as well, but it's never seen since investigating the bollard instantly puts the item in your inventory.

There's a rather large texture for a ladder here that isn't seen anywhere. Note that despite the "Ladder2" description, there is no other ladder to be found in the file.

There are two pieces of floating junk that seemingly go unused.

While in the sewers you eventually find a box, which you have to hack open with an axe to get a PVC Suit. This suit actually has a sprite, but since you instantly get it in your inventory after using the axe, you never get to see it.

RATSTAND
Rat grinning his ass off

Both of these rats actually do appear in the sewer, but with alternate animations.

Finally, there's a texture that claims to be unused, except that it's clearly being used in the crossroads section in the middle of the map.

In the lab there's a variety of random junk and doodads, but still two small textures go unused. 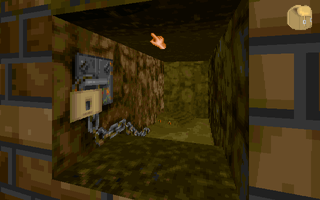 Despite the puzzle being cut, the crocodile was kept in. It's interactive but you can't unlock its chain or do anything else with it.

Apparently, the crocodile was originally supposed to play a bigger role or be part of some kind of puzzle, as there are textures for unlocking his chain.

CROCBIT1
No padlock no chain

There's a crocodile log as well that goes unused.

There are also some unused lines that refer to the puzzle:

An interesting fact is that the textures all refer to this being a crocodile, whereas the voice lines and an internal object name string refers to it being an alligator, indicating the devs were just as confused as most people are about what the difference is between the two. Visually it seems to be a crocodile, for the record.

There are several versions of the green sky (and blue sky, after blowing up the Ordinary Outpost):

Retrieved from "https://tcrf.net/index.php?title=Normality/Unused_Textures&oldid=1252577"
Categories:
Cleanup > To do
Subpages