This page contains notes for the game Mega Man Legends. 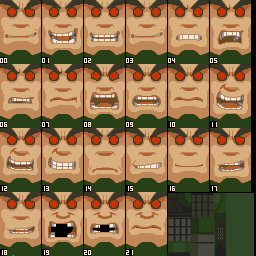 Teisel Bonne with his teeth broken. Or so it would seem. These particular textures are actually part of a really crafty transparency effect in character facial textures that use the PlayStation's alpha-blending to see past sides of open mouths through transparency. In one scene, Tiesel turns his head to his right and speaks, which at that point we can see right through his mouth at that angle. While retained in the final N64 port, the effect was temporarily nerfed in the Debug build, exposing the trick. See both images at the right.