The first third-party Famicom game ever! Also, it's quite fun. 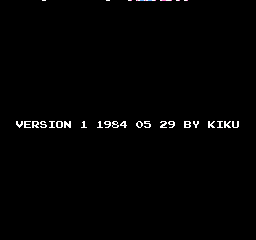 Start a new game and press Start to pause it. Then, hold Right + B on second controller and Left + A + B + Select on first controller. Afterward, press Start and a message saying "VERSION 1 1984 05 29 BY KIKU" will appear. After a few seconds, you will be taken to the next round.

"KIKU" is a pseudonym for Kikuta Masaaki (菊田昌昭), one of Hudson's programmers. Most games programmed by Kikuta Masaaki have secrets or hidden messages, like Raid on Bungeling Bay, Binary Land or Challenger. 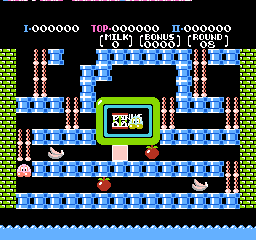 The Game Genie codes ESKTIOTX + OVKTTPXT + AESVLPPA partially re-enables full level editor functionality. On the development stage, there was an option to change the level number in the level editor and edit the corresponding level. The first level is a special case, saved only in RAM, where you can play it immediately. The levels greater than 1 can be edited and, most importantly, repacked to the main game's level storage! The code for packing levels is still there and working, but since the cartridge is a ROM, they can't be saved. Only by using some dev device with RAM memory at the 8000-FFFF area it is possible.

With this codes, you can select any level to modify by pressing Select. Since there is no RAM, any edits will be discarded anyway.

The final version of the level editor can't handle the bonus rounds and the special graphics for it. They also have some special cases to skip unused tiles, like the small heart. To see it, use the Game Genie code NYXTIZGE. There are no background graphics, so they are invisible on the level and work like an obstacle with not any active effect.

A Nintendo logo. Either the game was originally going to credit Nintendo, or Hudson didn't bother to remove the logo when they copied graphics from Pinball (the game borrows assets from several first-party titles).

The names of various objects from the game, intended for the level editor.

Tiles for an alternate design for Milk's house, bearing more than a slight resemblance to the houses in Nintendo's Popeye.

The beach ball sprite from Pinball is used as padding in the sprite CHR bank.