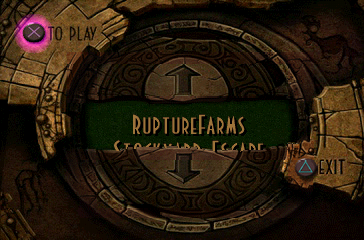 Enter one of the following codes at the main menu, depending on platform: 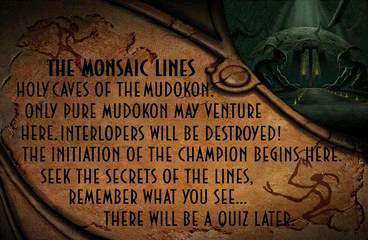 Screen ID: L1P01C17
A Story Stone overview of the Monsaic Lines, in the style of similar screens found in Paramonia and Scrabania. This was replaced with a different screen with a poem, a better fit with the mystical atmosphere of the area.

This screen remains untranslated in the Japanese version. 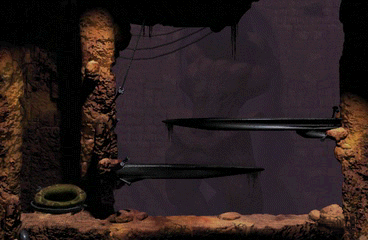 Screen ID: D2P06C08
This screen, found in Scrabania's seventh trail, is located underneath the bottom-rightmost area. The conspicuously industrial platforms are only found in this area, and the collision on said platforms is spotty at best. Since there are no objects on this screen, the well on the left is completely nonfunctional.

An unused clip of a Slig saying "Stay!". This would be the equivalent of Abe's "Wait!" command, but for Sligs.

While there is no place in the Monsaic Lines that an Elum is ridden, music exists for such a scenario, and seems to work if an Elum is hacked into the area. 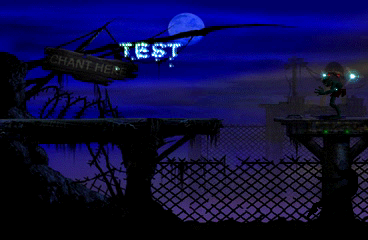 There are three messages left in from the demo version of the game:

One major change for the Japanese version affected all versions of future games: The smallest finger on the Mudokons' hand was removed. The change from four to three fingers came up during localization, as it was found that characters that had four fingers were potentially offensive to Burakumin, a low-class Japanese working group known for common work-related incidents at the time which resulted in workers' fingers being chopped off. Due to fears of having to pay exorbitant bills to "a vociferous pressure group", Oddworld Inhabitants chose to change the hand's design where it later stuck as it was fitting to the game's themes. 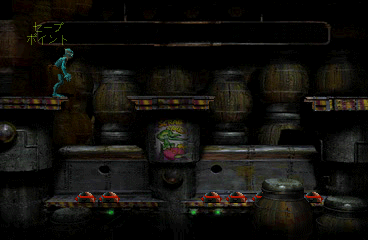 There are few differences, but these are of note:

"Whistle 1" and "Whistle 2" are replaced by musical notes, and L1 and L2 are no longer colored.

Since the resolution of Abe's sprite is so low, the only animation that really needed changing was his chanting animation.

The directory interface had to be redrawn as well...

...as did the Story Stones.

Obviously the image of the Mudokon Moon had to be changed on this screen.

Note that only the shots changed were the ones where a Mudokon hand is conspicuously present. There are several instances of the four-fingered design in the Japanese version, possibly due to the financial cost of re-rendering every shot of every cutscene.

The "Mudokon Pops" ads were made considerably less grisly for the Japanese release, due to current events at the time. (According to the official art book, it's a really long story.) This change was also carried over to all versions of Oddworld: Abe's Exoddus.

The meat chart directly after the ad now uses the updated three-fingered design.

After Abe is knocked out by the hanging pipe, the shot with his outstretched hand now only has three fingers.

All other shots in this short cutscene use the four-fingered design.

Since the impact on the Mudokon Moon had four fingers, it also had to be changed, otherwise its significance in the story would be fairly inexplicable. All shots of the "dead" Abe use three-fingered hands as well.

In addition to the finger removal and respacing of the remaining fingers, the Paramite scar was redrawn.

Strangely, even though Abe and Big Face's hands are prominently featured in many shots, the only changed shot is the last one.

As above, the Scrab Scar was redrawn for the Japanese version.

Since this cutscene recycles a number of shots from Paramite Scar, the four-fingered models are featured once again in all versions.

Abe's hands are now three-fingered in the shot prior to his Shrykull transformation.

The shot of Abe shaking his hands was left as-is in the Japanese version.

Standard finger change as Abe is dragged off by Slig guards.

The native Mudokon who decides Abe's final fate lost a finger. Amusingly, a stitch-like mark was added where the finger used to be.

Same ol' finger changes. Additionally, as Big Face is teleporting Abe out of RuptureFarms, he gradually glows brighter and brighter in the original version. This glowing effect was taken out of the Japanese version.

For this cutscene only, Big Face's loincloth was recolored from yellow to brown. The reason for this change is unknown.

Redesigned hands and recolored loincloths, for the final time.

Credits
The Japanese credits are stored in the file C1.MOV. In all other versions, C1.MOV is a dummy file that the game uses to trigger the credits slideshow. As a result of this change, the Japanese version is the only version that has the credits scroll by at a reasonable pace. 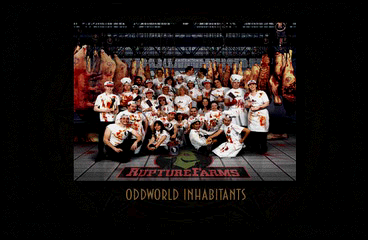 The Japanese credits are missing this screen found at the very end of the international credits.

There are six different versions of Abe's Oddysee, released in the order listed below: 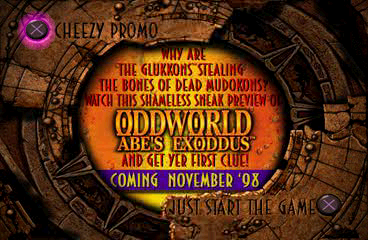 This is only present in Revision 1.1. Before starting a new game in this version, there's a prompt to watch an abbreviated version of the Abe's Exoddus intro. 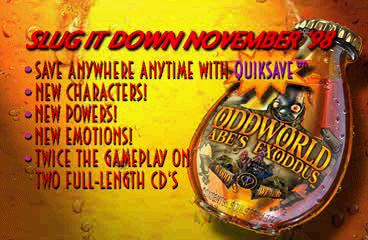 This is the screen that appears after the Exoddus video ends.

This video, only accessible through the Cutscenes menu cheat, can only be seen in-game in the original version of the game. It was intended as a television advert for the game, but was never aired for some reason. The creepy robot dude is apparently called The Shrink, and was intended to make a return in Munch's Oddysee, watching over Sam the Mudokon Queen, another cut character.

Even though the video was removed, it's still listed on the Cutscenes menu in Revision 1.1; Trying to view it will freeze the game for about 30 seconds, then play the Oddworld Intro video.

*The video is on the Japanese PS1 disc, but it was removed from the Cutscenes menu, so the only way to view it is with a PS1 movie viewer.

To make room for the new Abe's Exoddus video, some unnecessary cutscene videos and copies were removed in Revision 1.1.

The color of the pull rings in RuptureFarms was changed from a cheery lavender to an industrial silver.

Barely noticeable, but the Mudokon meditation graphics were touched up a bit in later versions.

The tube overlay on screen L1P01C11 of the Monsaic Lines was redrawn to mesh better with the surrounding graphics.

GT Europe has a concept image in Revision 1.1, which is nice and all, but it squeezed Germaine D. Mendes and Emily Britt out of the credits!

There are a number of places in the original version and PC port that needed collision updates in future releases. 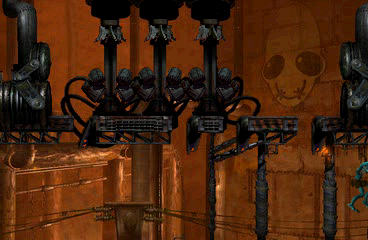 Screen ID: R1P20C05
In this area of RuptureFarms, if Abe runs off the right side of the screen, he'll warp to the screen to the right and continue falling until the game freezes. An invisible barrier was added to fix this problem; Abe now hits that barrier and dies if he falls to the right. 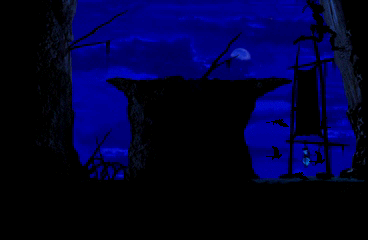 Screen ID: E1P04C02
If Abe jumps at the rightmost edge of the cliff above the bird portal, he'll go inside the wall and into the next area, where he'll promptly be eaten by a Slog. The collision object for the cliff wall was extended upwards to fix this bug. 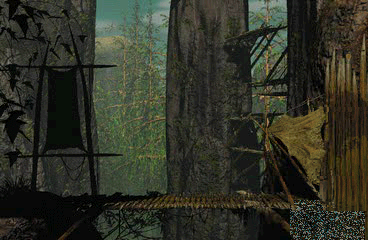 Screen ID: E1P04C02
If Abe jumps back into this screen while riding Elum, a garbage sprite will appear and fall in the bottom-right corner of the screen. A harmless bug, but it was still fixed by extending the collision of the floor more to the right.

Scrabania
Screen IDs: D1P03C04, D1P08C05
While there doesn't seem to be a way to activate the Elum jump glitch on these screens, the horizontal collision objects were extended anyway. 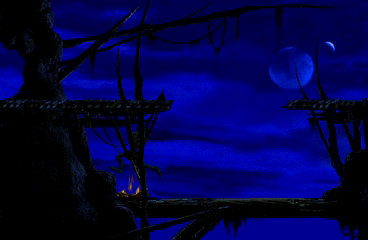 Screen ID: E2P04C01
If Abe jumps at this point on the screen, he'll go inside the wall and fall to his death after traveling through the screen to the left. The wall boundary was extended upwards to fix this little problem.

Screen ID: F1P02C04
The first version of the game lacks the spike barrier on the left edge of the platform. This was presumably added to keep the player from jumping off the left side with Elum with no way to get the lift back down. 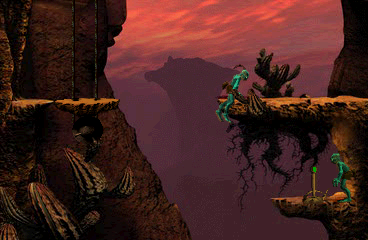 Screen ID: D1P02C06
In older versions of the game, it's possible to grab the right ledge and avoid getting hit by the bat below if you time it just right. If the player hits the checkpoint on the next screen, this leads to an unwinnable situation: The lift can't be grabbed on to, so the player can't go back to get Elum, who is required in the next section, and if the player dies, they'll respawn on the screen after this one.

This nasty oversight was fixed by tightening the bat's route. It's still possible to perform this exploit, but you have to be frame-perfect to do it. 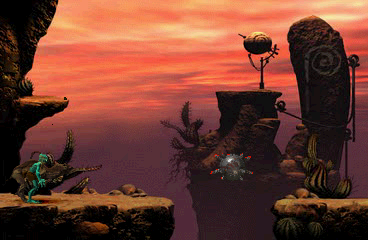 Screen ID: D1P07C14
The first version of the game has a checkpoint on this screen. This checkpoint is redundant, since the last checkpoint was on the previous screen, about two jumps to the left. Removed from all other versions. 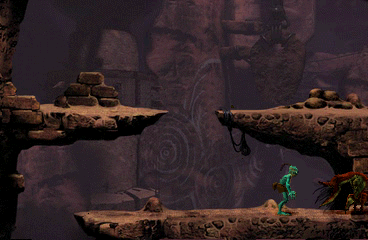 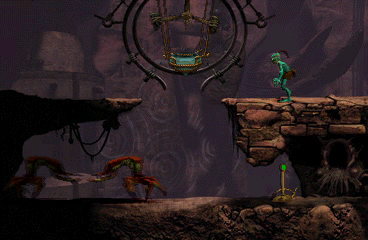 Screen IDs: D2P02C04, D2P05C09, D2P08C08
The hoist objects were repositioned slightly on these three screens. It's unclear what effect, if any, this has on gameplay or on fixing any particular bug.

Scrabanian Nest
In newer versions of the game, all Scrabs are tagged to stop updating once Abe is far enough away from them.

The Slig puzzle here was heavily modified from the original version of the game. In the original version, the Slig looks to the right for between 90 and 180 frames, waits 60 frames after spotting Abe before shooting him, and will chase Abe back to the previous screen. It's possible to completely bypass the Slig without killing him in this version, which leads to a big problem when the player has to travel back out of the area and the Slig shoots Abe the second he walks through the door.

Future versions make the following changes to prevent this from happening: