Yuki-chan is about to suplex some fools.

Besides using a microcontroller unit, this game has two additional anti-piracy features: 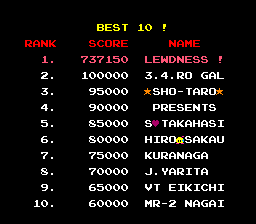 There are three sets of special high score names in the game. The first is a list of obscenities, mostly Japanese slang terms for vagina. Entering one of the names from the first column in the table below will replace it with a randomly-selected message from the second column:

The second group is English obscenities and half-obscenities which have their own list of randomized responses:

The third group seems to be developer names combined with heart and star characters, each with its own unique replacement message:

Of these names, the only one known to have worked on another Taito game is Satoshi Kuranaga, who is credited under Software Support on the 1987 game Extermination.