Operation Thunderbolt isn't about playing as a thunderbolt, but it's a cool name. Also, how would that even work? 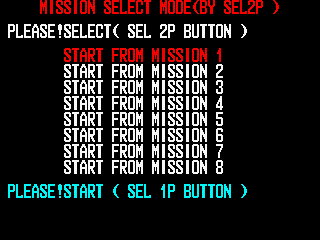 This prompts a stage select menu. Press 1P Start to select a mission, and 2P Start to start that mission. 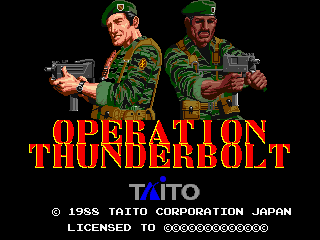 The word at address 0x3FFFE in the sub-CPU controls the game's region and copyright text. This is either 01 in the Japanese version, 02 in the US version, or 03 in the World version.

The unused value 04 sets the publisher to a placeholder "Licensed To" message. Taito self-published the game in all regions, so this string was never used.

Place the following code in any of the Operation Thunderbolt xml cheat files to switch between publishers:

The initial US version is identical to the World and Japanese version, save for the aforementioned region value at 0x3FFFE. The updated US version censored the game's text to remove all mentions of real world countries and organizations. Apparently, having the game's plot be loosely based on a real life hostage situation didn't sit well with Taito America Corp.

All of the labels on the map of North Africa were removed as well, including "Kalubya", aka Libya.

The CIA files were changed to ordinary files, both characters are now formerly from a naval brigade instead of the Green Berets, and all countries were removed from the war career section. Hardy Jones didn't get to keep anything!