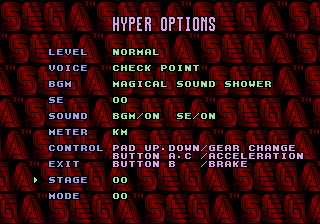 At the main menu, press A x11, B x3, C x8. This will add stage and mode options to the options menu, which function similarly to the ones in OutRun 2019:

This determines which stage/gameplay mode is currently active. A value of 0 means normal gameplay, and all other values choose the individual pieces of all the stages in succession, with the game resetting after you complete the stage associated with that piece (so you can play starting at any checkpoint, but only up to the end of that stage).

This value goes from 0 to 15, and different effects will be enabled depending on its chosen bit value:

First bit (+1): If set, collision with cars and most other objects is disabled (you will still collide with some things, such as guard rails, and even then the disabled collision with most other things seems to behave wonkily at best; what appears to happen is that it still registers that you hit one of these scenery objects and will slow you down, but will not send you flying, though this needs technical confirmation).

Second bit (+2): Infinite time (the game will not declare game over when the timer reaches zero).

Third bit (+4): Enables some debugging information on the HUD. 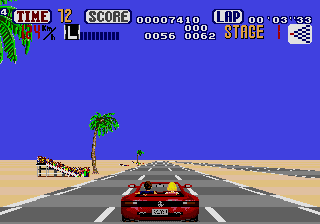 -The value of number on the top left corner is normally 3, but it changes to 4 during the end of track transitions.

-The three digit number in the middle changes its value from 128 to 0 when going off the track, and changes to 999 when the car collides. (Only works with collision disabled)

-The four digit number on the right counts how many meters the car has traveled while playing.

-The four digit number on the left changes its value regularly. Its purpose is unknown. 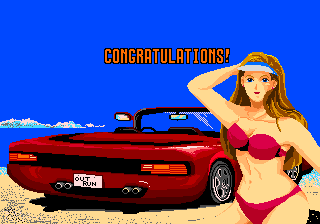 This will only work if the system region is set to Japan, even with the US/Europe ROM (the game is not region-locked otherwise; the region is checked at startup and saved in RAM for later so changing the region mid-game will not work; whether a reset will work is unknown). Get to the ending, either by beating the game five times landing on each goal or by entering ENDING as a high score name. Once the CONGRATULATIONS! screen starts, wait approximately 10-15 seconds, then press A once, B twice, and C seven times. You can press the buttons in any order. If done properly, the screen will immediately change to this one, which shows the brunette bikini girl from ending A.