In the Japanese version, press Left, Right, Left, Right, B, C, A at the title screen. A jingle should confirm this. Two things become unlocked:

The US version checks for the cheat code and plays the jingle, but does nothing. The cheat can still be enabled using Pro Action Replay code FF807F:0001 (FF807E:01 for Gens/GS).

(Source: for both sections, multiple, including nineko and Sik)

A build date is located in the ROM header, but only in the Japanese version. 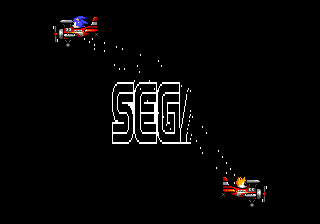 The Japanese version has a unique Sega screen featuring Sonic and Tails flying past each other, spraying pixels out of their airplanes which form the Sega logo. The logo then turns blue and splits into two, one for each "screen", then fades away. The US version features a standard Sega logo screen, followed by a Data East logo screen. 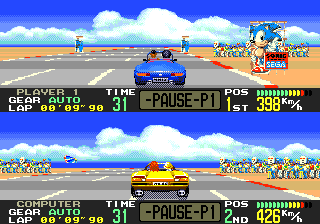 The Japanese version also features a few Sonic billboards, based on the cover artwork for the first game, near the start and finish of the race. These were completely removed from the US release.