A game where you can choose to be evil, or be REALLY evil.

A test map can be found under the title of PlayerMap.omp. It is a large map containing several enemies from the game, some sheep, some scenery items, many breakable items, a small pool of water, a switch (which does nothing once activated), a random patch of land that glows yellow and a huge amount of empty space. It is the only level that loads Test Pack.prp, which contains many items that can be found through the game. You always start off with 3 of each Minion type, and although you can gather life force, there is no way to obtain more Minions as the level lacks any type of Minion Gate. Interestingly, your current Minion cap does not apply to this level. 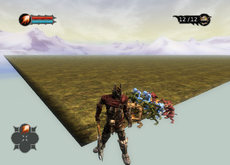 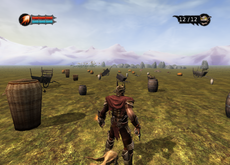 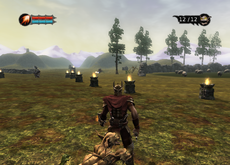 A file contained within the Sub 01 - Blue Cave folder, titled BlueCave - Copy.omp, contains an earlier version of The Moist Hollows. Whilst the general layout is the same as the final, there are several differences.

There's a file amongst the Moist Hollows maps entitled Env_Bluecave.env. No other level has this type of file, and removing it does not prevent the level from loading.

There are several placeholder files in the Music folder. Each one is a blank, 1 second long MP3 file.

An unused graphic using the title logo-paul.bmp can be found in the game files. Presumably from a company review copy.