Pac-Man 2: The New Adventures is an "interactive cartoon" starring Namco's iconic mascot, Pac-Man. In this game, rather than controlling the hero himself, you influence his behavior by either shooting objects with a slingshot (including Pac-Man himself!) or telling him to look in a certain direction.

Pro Action Replay (PAR) code 82BE5F05 (82BE5305 in the Japanese version) will enable two hidden options on the title screen. Simply move the cursor past ))STEREO(( to select them (note that both options are blank).

Unknown function. The game appears to start normally, but then crashes immediately after the intro scene ends. May reference debugging code that is no longer available.

Used to access both an animation test (PAC TEST) and a sound test (SND TEST), both of which are completely different from the ones normally available via passwords. 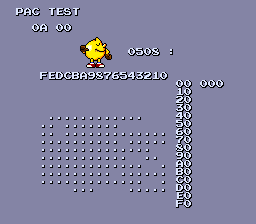 Press B or tap Start to access PAC TEST, where you can view all of Pac-Man's animations. The number next to Pac-Man indicates his current pose; press Left or Right to highlight a number, and then press Up or Down to change it (don't go past 5A6 or the game will crash). You can also press L or R to change Pac-Man's face, which will then be displayed for all subsequent poses (leading to some hilarious results).

Pressing Select will change the 000 on the right side to 200, as well as shuffle the dots in the hex grid around. What the dots actually represent is currently unknown. 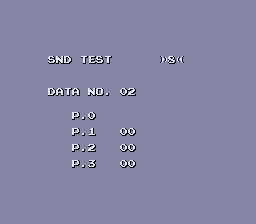 Hold Start to access SND TEST, which is (oddly enough) a sound test. Press Up or Down to choose one of the five sets of numbers, and press Left or Right to change it. Press L or R to cycle the number next to SND TEST between 5, 7, and 8 (this seems to limit the number of available sound channels or something).

The available options are:

Sending values directly to ports 1 through 3 doesn't do anything, since the game's sound driver only uses those ports to receive data when loading a new sound bank. 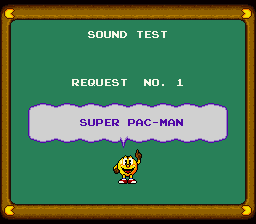 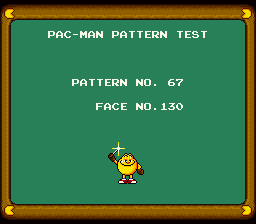 More polished versions of the sound and pattern tests can be accessed by entering the following passwords:

However, while they are more polished, both tests are missing music and graphics that are available in the unused versions.

Enter PCMN0VR. You'll appear outside of Pac-Man's house. Enter the house to view the credits.

The opening of "Haste Makes Waste", the theme for the Mountain area, is unused in-game, as the song always starts as the loop area. It can still be heard in the Sound Test however. This part of the song is completely absent from the Genesis port. 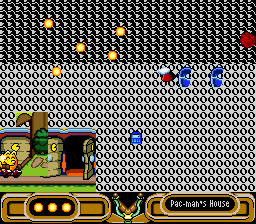 Enter the Pro Action Replay (PAR) code 7E050203. This is a glitched Pac-Man's House, but in the Japanese version this is called "himitsu" or "secret", seemingly for no reason. In the English version it's just labelled Pac-Man's House again. It should be noted that there is no solid ground here, so Pac-Man will instantly fall. 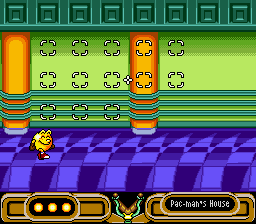 Enter the Pro Action Replay (PAR) code 7E05021F. It is a debug room taking place (appropriately?) in the Old Game Center. There are 13 targets. Shooting the target reticules will make Pac-Man do certain actions automatically. The Japanese version labels this room as "Renshuu", which is the same name as the tutorial.

A face of a horrified(?) mouthless Pac-Man can be found in Pattern Test. While this (And the face below) technically aren't unused, they're never seen in-game, and can only be seen here. They are also present in the Genesis version.

A list of developers' names can be found right at the beginning of the ROM:

It is unknown who most of the developers are, but Tajima is Katsuro Tajima, the game's sound composer.

The whole Pac family looks a little different between versions. The international versions mostly just use heavier shading, though Ms. Pac-Man and Pac-Jr. (seemingly not Jr. Pac-Man) were given a bit of a facelift in the Japanese version.

The password system uses different characters between versions. As was the norm at the time, the international versions have no vowels (a trait which would carry over to the GBA port of Pac-Man World 2, which featured password-based saving), and the special passwords were also changed: