Pac-Man Museum+ is a sequel to Pac-Man Museum with more games, though minus Ms. Pac-Man and plus Pac-Mom (a new character created to circumvent Ms. Pac's legal limbo).

Several of the modern Pac-Man titles had their codebases converted over into the Unity engine, providing native ports. However, plenty of leftovers exist from several titles as a result.

The Museum Hub model for Pac-Man has eight face models, but only three are used in-game - m_face_A, m_face_B, and m_face_C.

Faces D and E resemble the ones used in Pac-Man World for him being hit and dying. 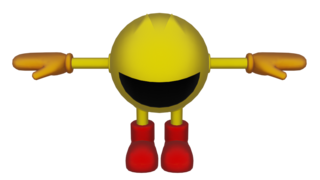 Faces F, G, and H appear to be his default face model minus the eyes, eyebrow detailing, and tongue. Given its simplicity, it was likely used as a placeholder in case more expressions were needed.

Professor Pac, one of the Visitor NPCs you can unlock who will roam around in the Museum Hub, has three face models. Only one of these, m_face_A, is used in-game.

m_face_B is an open mouth expression likely for talking, while m_face_C features a textured grimace on his face. m_face_C is used for Professor Pac's statue model, which uses a different texture file.

Unused wallpapers based on different holidays/seasons. Could potentially be added in future updates.

Unused figures of the Peach, Banana, and Lemon.